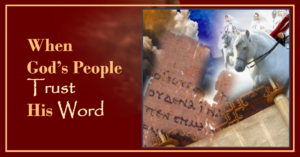 How often have you run into a question like this?

It’s conventional wisdom among many that our Bible is not trustworthy. That error has been introduced—deliberately or not—through centuries of copying and translating. And no surprise there… of course our culture of moral relativism happily embraces this argument as truth. If the Bible can’t be trusted, then there’s no absolute moral standard to confront our sin.

My husband and I were fortunate enough to come across an arsenal of ammunition to counter these arguments, and I’m excited to share it with you.

But first, true confessions. The content of this post has been shamelessly stolen from this lecture given by Dr. Daniel Wallace, Senior Research Professor of New Testament Studies at Dallas Theological Seminary and Executive Director of the Center for the Study of New Testament Manuscripts (www.csntm.org). Dr. Wallace is a former pastor, professor and author whose Exegetical Syntax of the New Testament is the standard intermediate Greek grammar used in seminaries. His current focus is traveling the world to study and photograph ancient New Testament manuscripts so they can be accessed online from all nations.

Dr. Wallace is an engaging speaker and I’d definitely encourage you to watch his lecture in its entirety. But the information is crucial enough I’m also going to summarize the key points here.

Question #1: How many textual variants exist in the New Testament manuscripts?

If we only had one ancient manuscript, we would have no textual variances. But with nearly 6,000 ancient handwritten copies of the New Testament in existence, and more being discovered every year, we have an embarrassment of riches. Especially when compared with other ancient writings.

Compare this with the average classical Greek writer, who has less than fifteen copies of his work in existence! This is still a lot of papyrus, or parchment. If piled up, those fifteen manuscripts would create a stack about four feet tall. 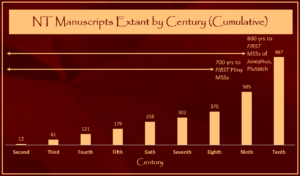 We have four times more New Testament manuscripts within 200 years of their authorship than the average Greco-Roman author has within 2000 years. We have to wait 700 years before we have any copies of Pliny the Elder. 800 years for Plutarch or Josephus. More than a millennium before we have copies of other ancient histories such as Polybius, Herodotus, or Xenophon. They don’t even show up within the timeframe of this chart!

Here’s another fact I find fascinating. When the King James Version was published, we had only seven ancient manuscripts, of which the earliest dated from the eleventh century. Today, we have nearly 6000 ancient manuscripts going back to the second century. To put it another way, today we have nearly 1000 times as many manuscripts, some of which go back as much as 1000 years earlier, than they had when they translated the KJV.

I find this information useful when people claim that, due to all the copying and translating, we can’t know what the Bible originally said. “That might have been a reasonable thing to believe a few decades ago,” I tell them, giving them a very generous benefit of the doubt! Or, “…a reasonable thing for Joseph Smith to believe. But it isn’t today. And here’s why.” Then I explain how the picture has changed since the King James Version was published.

Dr. Wallace states it like this. “As time goes by we are getting closer and closer to the original manuscripts.” Not further away, as many have been led to believe.

Please don’t get me wrong. It’s not my intention to “dis” the King James Version. The King James Version Bible was an amazing work of scholarship in its day, representing an admirable balance of beauty and accuracy that made it the standard for generations. And powerfully used in countless lives. As Dr. Wallace also states in this article (which would be a good one to check out if you’re interested in a more detailed discussion of the KJV versus more modern translations):

No translation is infallible. God “breathed” His word (2 Tim 3:16) to the apostles and prophets, not to the KJV translation committee. But, in spite of all the obstacles posed by our limited human capabilities and resources, the veracity of the doctrines in the KJV shows how God has been faithful to preserve His word for all generations! Hallelujah!

So if you prefer to cling to your King James Version, I have no issue with that. However, three hundred words used in the King James Version have changed their meaning over time. Unless Elizabethan English happens to be your first language, a solid modern translation will probably aid your understanding–as well as reflecting the “embarrassment of riches” in ancient sources we now enjoy.

I use the NASB and the NKJV myself, but I also consult an interlinear that lets me examine the Greek and Hebrew words regularly. This really takes my understanding to a different depth, and it’s very easy to do today! I have two different apps on my iPAD that give me this capability, and you can also get to an interlinear version by typing, for example, biblehub interlinear John 1 into Google. Click on the blue link above any Greek word in Biblehub’s interlinear display and it will allow you to look up the word in Strong’s and to compare other places where that same Greek word has been used. Talk about an embarrassment of riches!

With that many hand-written manuscripts, there will be variants. Especially given that standardized spelling is a fairly modern invention that didn’t exist in Jesus’ day. John, for example, spells exactly the same verb three different ways within eight verses of John 9.

Seventy percent of the textual variants are simply differences in spelling.

You can categorize the variances based on whether they’re meaningful and/or viable.

Yes, between those ~6000 manuscripts, there are probably half a million variants. But, less than one half of one percent of the variances are both meaningful and viable. In other words, over 99% of these variances have zero impact on our understanding of God’s word.

Are Muslims (and Dan Brown) potentially correct in maintaining that the deity of Christ was a later invention, to pick one example?

“Every single manuscript of John’s Gospel, no matter the date or the language, says virtually the same thing in John 1:1: Jesus is unequivocally called God.
The same can be said for the major passages that affirm Christ’s deity, His virgin birth, His sinlessness, His death on a cross, His bodily resurrection, and His second coming.”
– Dr. Daniel Wallace 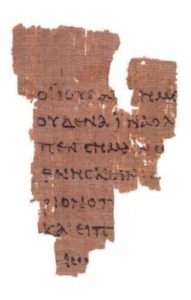 Papyrus 52, a second-century
fragment from John 18.

In his lecture, Dr. Wallace covers a few of the most prominent examples of disputed passages. You’re probably already aware of the two largest passages that appear not to be original (which should be set off with square brackets in your Bible):

You’ll have to listen to Dr. Wallace’s lecture for his conclusions on these passages. But ask yourself: much as we all love the story of the woman taken in adultery, does it teach us anything we don’t learn elsewhere in the Bible? Is it the only place we see Jesus confronting hypocrisy, defending the defenseless, forgiving sin?

While both of these disputed passages happen to be twelve verses long, they are not representative. After these two, the longest variant passage is only two verses long.

The most interesting variant Dr. Wallace mentions is Rev 13:18. It seems scholars are uncovering ancient sources that are posing the question—should “the number of the beast” be 616 instead of 666? (So if your church happens to have “the number of the beast is 666” written into its statement of faith, they might need to rethink that one in light of recent textual discoveries. 😉 )

Lie #2: The essence of the Christian faith has been corrupted

Sceptics make it sound as if every one of the half million variants is both the meaningful and viable, and as if everything Christians believe is in question. But even Bart Ehrman, author of the book Misquoting Jesus, which is one of the primary sources referenced by those who wish to put together a scholarly argument debunking the Bible, has had to admit the following.

“Essential Christian beliefs are not affected by textual variants in the manuscript tradition of the New Testament.”
– Bart Ehrman, appendix to the original paperback edition of Misquoting Jesus, p.252.

This appendix was later removed—no doubt because Ehrman’s frank admission was hurting sales.

“There is no cardinal doctrine of the Christian faith that is impacted by any viable variant.”

…an assertion even Bart Ehrman, the author of Misquoting Jesus, had to agree with.

So with nearly 6000 ancient manuscripts in our hands, not one of our fundamental beliefs is in question.

So how do I respond now to questions like those at the top of this post? Something like this: “Perhaps this information might not prove to you that the Bible is the word of God. But with the wealth of ancient manuscripts we have today, I can tell you this much. When Jesus’ ‘beloved disciple’ John sat down to write about everything he experienced with Jesus, we know what John said. And it’s what’s in my Bible today.”

In the beginning was the Word. And the Word was with God, and the Word was God. (John 1:1)
But as many as received Him, to them He gave the right to become children of God, even to those who believe in His name. (John 1:14)
I am the way, the truth, and the life. No one comes to the Father except through me. (John 14:6)

Matthew was willing to be martyred, and John to live out his life on a prison island, because of their experience with Jesus. And we have both their first-hand accounts of that experience in our Bibles.

We know that in the last days, “this gospel of the kingdom will be preached in all the world” (Matt 24:14). I picture this mile-high stack of crumbling ancient manuscripts. And Dr. Wallace and his Center for the Study of New Testament Manuscripts team jetting around the globe, spending weeks in musty chambers to photograph as many of those manuscripts as possible and display them on line. Where they can be accessed by scholars “in all the world.”

There are many, many developments in our day that fit Jesus’ Matt 24:14 prophecy. But I have to think that the way this vast pile of ancient testimonies to the Gospel of Jesus is coming to light–and becoming so accessible–is one of those fulfillments.