When God’s People Count the Days 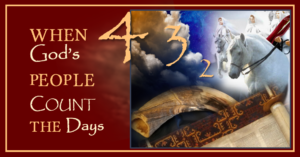 We’re entering the most significant forty days in the Hebrew calendar. And they come with a poignant invitation to enter the Lamb’s Book of Life.

Will we heed the sound of God’s shofar?

I didn’t plan very well this month! I started a series on the dramatic regathering of the Lost Tribes of Israel (the posts are here and here). It’s an amazing story of prophecy fulfilled. The third post is actually the punchline :), but I’m going to have to pause the series for a couple of weeks before I run that one. I have something pressing to cover this week, and a wonderful guest post scheduled for next week.

What’s so pressing? Well, if you visit my blog often, you’ll know that I often draw inspiration from the Hebrew calendar. Nothing in the Bible is “old news.” God’s calendar proclaims so clearly that history is His-story!

Last weekend’s new moon ushered in Elul, the last month of the Jewish civil year. Which brings us into a very auspicious season. Elul leads up to the month of Tishri, which kicks off with the Jewish High Holidays, also called the “Days of Awe”:

The forty days between Elul 1 and Yom Kippur, which we’re in now, are very significant in rabbinic teaching.

Traditionally, Rosh Chodesh Elul [the first of Elul] marks the beginning of a forty-day “Season of Teshuvah” [Repentence] that culminates on the solemn holiday of Yom Kippur…. a time each year to prepare for the Yamim Nora’im, the “Days of Awe,” by getting our spiritual house in order.

During this time we make additional effort to repent, or “turn [shuv] toward God.” In Jewish tradition, these forty days are sometimes called Yemei Ratzon, Days of Favor, since it was during this time that the Lord forgave the Jewish nation after the sin of the Golden Calf.

During the month of Elul it’s customary to blow the shofar daily. Each day except Shabbat the following blasts are sounded:

(If you’re curious as to what that sounds like, you can check it out here.)

The purpose of all this shofar-blowing is to remind the people to look to the state of their souls in preparation for the High Holidays. During this forty-day period, easily more than 450 trumpet blasts will echo! This culminates in the Feast of Trumpets itself, when one hundred trumpet blasts are blown.

According to Paul, “the last trumpet” will sound before we’re caught up in the air.

Behold, I tell you a mystery: We shall not all sleep, but we shall all be changed—in a moment, in the twinkling of an eye, at the last trumpet. For the trumpet will sound, and the dead will be raised incorruptible, and we shall be changed. (1 Cor 15:51)

Many believe Paul’s language in this key passage regarding the Rapture may be a reference to this Feast.

And they [the Jewish people] will fall by the edge of the sword, and will be led captive into all the nations; and Jerusalem will be trampled under foot by the Gentiles until the times of the Gentiles are fulfilled. There will be signs in sun and moon and stars, and on the earth dismay among nations, in perplexity at the roaring of the sea and the waves, men fainting from fear and the expectation of the things which are coming upon the world; for the powers of the heavens will be shaken. Then they will see the Son of Man coming in a cloud with power and great glory. But when these things begin to take place, straighten up and lift up your heads, because your redemption is drawing near. (Luke 21:24-28)

The first verse gives you the eviction of the Jews under Hadrian in ~135 A.D., and the 1800-year Jewish diaspora, in a single sweeping sentence! Then the context jumps to the end of the Age of the Gentiles (Church Age).

Last year, the Forty Days of Repentance opened with a spectacular total solar eclipse that split the United States, with an estimated audience of 220 million people—perhaps the largest audience for a total eclipse ever. 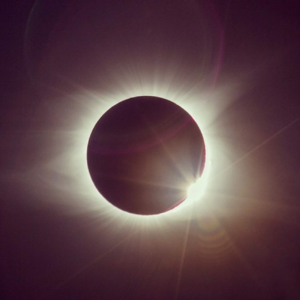 Last year’s Forty Days also closed with the magnificent Revelation 12 Sign, and featured a stultifying list of natural disasters. (For analysis on the eclipse and selected other events, see this post.)

Odd, yes? Did you know that the laboring woman motif is used dozens of times in the Bible, and is almost always linked to the last days or the outpouring of God’s judgment?

Luke 21 prophesies “dismay and perplexity” specifically at the roaring of the sea and waves.

“…Dismay among nations, in perplexity at the roaring of the sea and the waves, men fainting from fear and the expectation of the things which are coming upon the world…” (Luke 21:25-26).

I had always wondered about that phrase, but last year at this time, the shoe sure fit.

Last year in the midst of Elul: Katia, Irma, Jose

How about this screenshot for a sign of the times? Toward the end of the Forty Days last year, there were too many disasters for Compassion International to even list. 🙁 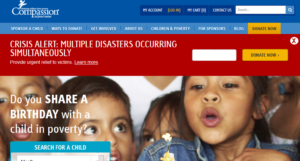 I had a weird thought at about the midpoint of last year’s forty days. I mentioned earlier the Jewish practice of sounding the shofar daily during the Forty Days of Repentance as a reminder to look to the state of our souls, in preparation for the Feast of Trumpets and Yom Kippur to come.

Great signs in the heavens, hurricanes, earthquakes, volcanoes, monsoons and floods, wildfires, a series of solar flares including the biggest in a decade…. Could “birth pangs” like these be the sound of the Almighty’s shofar, giving us a final warning to look to the state of our souls?

Going back to Luke 21, Yeshua says that the following will mark the end of the Age of the Gentiles.

This Year: Kicking Off with a Remarkable Pattern of Eclipses

It didn’t get nearly the same level of exposure, at least here, but this year the month of Elul also began with a solar eclipse–although this one was partial, not total, and visible only in the far Northern Hemisphere. But it intrigues me that it followed just after two other eclipses. Yes, three eclipses within a  month:

The blood moon on 7/27 was the longest blood moon of the century. The moon speaks of Israel, while the sun speaks of the nations. So such a stunning blood moon directly over Jerusalem… one hundred days after Israel celebrated its seventieth birthday on April 18… would seem to be significant.

And please take a look at this remarkable pattern. Thanks to Meranda Devan for highlighting it. The bottom half of the diagram shows the ten lunar eclipses centered around the famous tetrad that took place in 2014/15. Note how the timeline of these ten blood moons displays perfect symmetry, to the day, around the date of 1/5/2015. According to Meranda’s research, no other tetrad since 3000 B.C. has displayed such perfect symmetry.

Further, the solar eclipses in 2011 and 2018/2019 display the same strange symmetry–around the same date.

And note where we are today–almost at the end of the eight-year-long pattern. It wraps up in January.

What does that mean?
Why is it centered around that specific date?
Is it significant that the sequence is coming to an end? (Surely.)

All great questions.
Is it a cosmic accident? I don’t think so.

We have witnessed a stunning lineup of signs in the past eight years. It is my firm belief (and certainly not just mine–here for an example is an interesting analysis based on Micah 5) that we are witnessing the end of the Age of the Gentiles. The focus of God’s prophetic plan is moving back to Israel and to the fulfillment of the final week of Daniel’s prophecy–the time of Jacob’s trouble (Dan 12:1).

I don’t claim any special prophetic gift, although I do feel that the Lord shows me things from time to time when I’m diligent to study! But it seems to me that the combination of

…could be read as one more symbol reinforcing just that. (Again, the moon speaks of Israel while the sun speaks of the nations.) Perhaps the solar eclipse that kicked off Elul this year, which paled in comparison to last year’s and showed up primarily over relatively desolate lands, further reinforces the message.

The Son of Man is coming, beloved!

Your Invitation Into the Lamb’s Book of Life

There is a Jewish tradition that the “book of life” and “book of death” are opened on Rosh Hashana and closed on Yom Kippur, thus sealing the “decree” for each person for the New Year. So in rabbinical Jewish practice, the forty days leading up to Yom Kippur constitute a last opportunity for the righteous to demonstrate their faithfulness and have their names inscribed in the “book of life” for the coming year.

Why forty days? The rabbis teach that, after Moses descended from Sinai, he saw the people’s sin and broke the first set of tablets. He ascended Mount Sinai again on Elul 1 and remained there forty days. He came down on Yom Kippur with atonement made, carrying a new set of tablets representing a second chance for Israel. (Deut 9:25 – 10:10)

Numbers are always significant in the Bible. Mentioned 146 times in Scripture, the number forty speaks of preparation though testing and, optimistically, of a new work.

Forty days of cleansing rain during the Flood.
Forty years in Egypt for Moses, then forty years in the Midian desert caring for sheep while the Lord prepared him to lead His people.
Forty days on Mount Sinai for Moses–three times.
Forty years in the wilderness for the children of Israel, while a new generation grew up to replace those who participated in the Sin of the Spies.
Forty days of testing for Yeshua in the Judean wilderness before His ministry began.
Yeshua also appeared to the disciples for forty days after His resurrection.

Sadly, the invitation to be made over and join God in a new work isn’t always accepted. The spies spent forty days in the land, then delivered their negative report. The prophet Ezekiel lay on his right side for forty days to symbolize Judah’s sins, but they refused to repent.

Maybe all that activity during last year’s Forty Days of Repentance was an anomaly. Maybe. But I’m waiting to see what the Lord has tee’d up this year. Will His shofar sound through the Forty Days once more?

Brothers and sisters, if you haven’t made a personal commitment to accept Jesus Christ’s free gift of salvation and to follow Him with all your strength, I urge you to wait no longer!

If you’ve never opened God’s free gift of salvation through Jesus (Rom 3:23, 6:23), please please please be persuaded to do it now! It’s simple. Just tell God from your heart that you admit you’re a sinner that needs a Savior (“For all have sinned and fall short of the glory of God.” Rom 3:23), that you’re done running your own life, and that you’re ready to make Jesus Lord of your life.