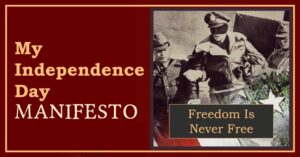 On Sunday morning, someone greeted me with the words “Happy Fourth of July!” It was an ordinary enough thing to do, and I gave her a courteous response. But this time, it kind of set me off inside.

We do not celebrate a number on the calendar, a day when we just happen to have a random tradition of setting off fireworks and firing up the grill. We celebrate “Independence Day,” the date our nation’s founders determined to purchase freedom for themselves–at any price. And that freedom is under assault now, in a way perhaps it has never been since our nation’s founding.

We hold these truths to be self-evident, that all men are created equal, that they are endowed by their Creator with certain unalienable Rights, that among these are Life, Liberty and the pursuit of Happiness.—That to secure these rights, Governments are instituted among Men, deriving their just powers from the consent of the governed…

A dear friend who was visiting from another country once asked me what I consider so special about the U.S.A. My answer? We are the longest-running and most successful experiment with the idea that “we the people” don’t need a ruling class–some form of oligarchy. “We the people” are more than capable of governing ourselves via elected officials who “derive their just powers from the consent of the governed…”

However, as Ronald Reagan put it so eloquently: 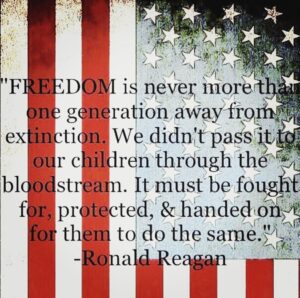 Or, as Paul stated:

It was for freedom that Christ set us free; therefore keep standing firm and do not be subject again to a yoke of slavery. (Gal 5:1)

Paul was referring to freedom from religious legalism, but IMO the principle applies more broadly. There are always powerful forces–human and spiritual–that would keep us enslaved for their own benefit. Freedom must always be won, cherished, and protected at a price.

And at the risk of stating what’s probably already obvious to you, we are in a pitched battle against those forces today! Therefore, I decided that morning to compose my own Independence Day Manifesto.

I will not be silenced in the public square of our day, even if my opinions don’t align with the Sacred Narrative approved by Big Tech and Big Media. From this day forward, I will focus my outreach efforts on platforms that do not “cancel” free thought and speech based on Biblical values.

I remember joining many others in sounding the alarm months ago, when Twitter “canceled” Trump. It has become abundantly clear since that if you hold to Biblical morality, these platforms are not your friends. Why keep playing when the field isn’t level?

Look for me in the future on MeWe and Telegram rather than on Instagram, Twitter or Pinterest. (LOL. I’m not set up very well on either platform right now, but I’ll keep you posted.)

From this day forward, I will not be prevented by any public emergency from “continually devoting myself to the apostles’ teaching and to fellowship, to the breaking of bread and to [communal] prayer…. ” (Acts 2:42)

In fact, a public emergency is all the more reason to double down on this! As Joel admonished his people, who faced impending judgment:

Blow a trumpet in Zion,
Consecrate a fast, proclaim a solemn assembly,
Gather the people, sanctify the congregation,
Assemble the elders,
Gather the children and the nursing infants.
Have the groom come out of his room
And the bride out of her bridal chamber.
Let the priests, the Lord’s ministers,
Weep between the porch and the altar,
And let them say, “Spare Your people, Lord,
And do not make Your inheritance a disgrace,
With the nations jeering at them.
Why should those among the peoples say,
“Where is their God?” (Joel 2:15-17)

What does “Life, Liberty and the pursuit of Happiness” even mean if it doesn’t include the ability to refuse medical procedures that I don’t believe are in my best interest? If I don’t have the freedom to determine what is done to my body, “a temple of the Holy Spirit within me” (1 Cor 6:19), what real freedom do I have?

I won’t belabor my thoughts on this now, although I’ve shared plenty in the past and I’m sure I’ll have more to say in the future. But the CDC’s own data records close to 7000 deaths that have been reported, linked in some way to the Covid-19 vaccines. 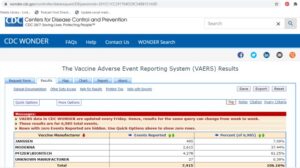 (Here are the query filters that I used to obtain the statistics above from the CDC’s own VAERS database.)

Not to mention tens of thousands of other injuries deemed life-threatening or permanently disabling.

Where’s the outcry, you ask? Vaccine programs have been pulled in the past over less than 50 potentially linked fatalities, so how is it that nearly 7000 deaths seem not to be ringing any alarm bells?

That, my dear friend, is the question of the hour.

(In case you’re not convinced these numbers could possibly be real, please check out my previous post for lots more detail.)

Adverse effects on cardiovascular and neurological systems are commonly reported after the Covid injections, as are worrisome menstrual irregularities among young women. I am personally close to people who have experienced severe and unexpected problems in these categories within weeks of their second jab.

An elderly, but very fit, male friend with no known preexisting conditions died of a heart attack.

A woman I know well may be permanently disabled by her sudden and “unexplained” neurological condition.

Perhaps the most concerning are reports of hundreds of deaths from myocarditis–in healthy young men and teens!

The safety panel acknowledged more than 1,200 cases of myocarditis or pericarditis in 16- to-24-year-olds who received an mRNA COVID vaccine, mostly occurring in males after the second dose.

For that demographic, the injection is clearly proving much more dangerous than the disease. Yet they’re pushing forward with the jabs in that age group–and trials even for infants–anyway! Why??

No thank you. Not for me–for this and quite a number of reasons.

I suspect I will expand on this little manifesto as the events of our day carry us along. But let me close for now with a quote that always stirs my heart. These are the words of George Barr, Jacob DeShazer, Robert Hite and Chase Nielson, as they reflect on their harrowing experience as WWII POWs that inspired my first novel.

“We hold these truths to be self-evident, that all men are created equal, that they are endowed by their Creator with certain unalienable rights, that among these are life, liberty and the pursuit of happiness. That to secure these rights, governments are instituted among men, deriving their just powers from the consent of the governed…”

The meaning of those words really comes home to you when you are confined by a brutal enemy who totally reject the concept of individual liberty.

We were not what you would call religious men before we were captured. We went to Sunday school and church when we were kids… We memorized Bible verses and listened to sermons and said grace at meals. We knew the Ten Commandments. But we never really understood the meaning behind those words and the source of strength they represented in our lives….

We were given the Bible to read. We found in its ripped and faded pages a source of courage and faith we never realized existed. The verses we memorized as children suddenly came alive and became as vital to us as food.

We put our trust in the God we had not really accepted before and discovered that faith in His Word could carry us through the greatest peril of our lives. Our United States, when still a young nation, proudly proclaimed its position to the world in its slogan “In God We Trust.” It is the only nation on earth that has its entire heritage resting on the firm foundation of faith in a God who rules the world with justice and mercy….

Those principles heartened the soldiers of the Revolutionary War… They served to help us through some of our most doubtful moments….

Our buddies… died to perpetuate those ideals. We do not think they died in vain.

My freedom was purchased at a supreme price. First and foremost, the blood of my Eternal Savior. Joined by that of hundreds of millions of heroes who made the ultimate sacrifice for the ideals of democracy and freedom. May I never sell their sacrifice short by relinquishing those freedoms lightly! 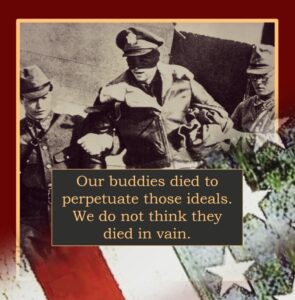 If you’ve never opened God’s freeing gift of salvation through Jesus (Rom 3:23, 6:23), please please please be persuaded to do it now! It’s simple. Just tell God from your heart that you admit you’re a sinner that needs a Savior (“For all have sinned and fall short of the glory of God.” Rom 3:23) that you’re done running your own life, and that you’re ready to make Jesus Lord of your life.

My Latest Novel Is An Award Winner!

I’m simply mind-blown at the news that The Mulberry Leaf Whispers has received an “IPPY”: the Independent Publisher Book Award Gold Medal in the Religious Fiction category. I now have an award-winning series!

A WWII Japanese naval officer. The teenage daughter of a legendary Christian samurai. Three centuries separate them, but a crucial question binds their destinies together.

Which lives have value?

In the highly anticipated sequel to her award-winning debut novel, The Plum Blooms in Winter, Linda Thompson provides a riveting story inspired by true events.

“Splendid story!… Rivals Shogun with its sweeping story of passion and faith, of survival and hope…. Be prepared to be enriched, moved and deeply satisfied.” – Jane Kirkpatrick, award-winning author of Something Worth Doing

“Gorgeous… not-to-be-missed…”  – Sarah Sundin, bestselling and Carol Award-winning author of When Twilight Breaks and the Sunrise at Normandy series

1587. Bartered off in a peace agreement to the ancient enemies of her illustrious house, is Sono a war prize, a hostage, or a bride? One hope sustains her. If she can provide an heir to the dashing husband she just met, she’ll ensure decades of peace for the beloved family she was forced to leave behind. But when a dark secret threatens her desperate bid to purchase their security, she must rise to a battle she never dreamed she’d fight.

1942. Akira Matsuura’s naval vessel explodes under enemy fire. Everything he has lived for disappears in flames with it. His command, his crew, his future—all lost. Worse, his honor is eternally decimated. A prisoner’s life is of value to no one. Least of all to himself. But a stunning twist reveals his family’s secret shame. Can a long-buried truth provide the vital spark that reignites his will to live?

Thrill to two poignant journeys of courage, duty, and sacrifice, deftly woven through the centuries to inspire with dynamic faith that conquers despair.