Home \ Blog \ When the True Light Invades the Feast of Lights

When the True Light Invades the Feast of Lights 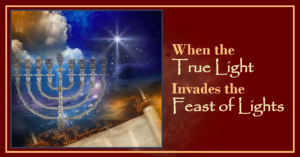 The iconic Jewish feast of Hanukkah started last night at sunset. The only time Hanukkah is mentioned in Scripture is when Yeshua observes it! (John 10:22)
(At least in the Bibles most of us use.)
So… what happens when the True Light shows up at the Feast of Lights??

At that time the Feast of the Dedication took place at Jerusalem; it was winter, and Jesus was walking in the temple in the portico of Solomon. (John 10:22-23)

The feast mentioned here is Hanukkah. Yes, Yeshua the Jewish Messiah and His disciples observed Hanukkah, not Christmas—reason enough for us to learn its history!

Most of our Bibles don’t have the story of Hanukkah and the Maccabees, although some versions include the Books of Maccabees. If you aren’t familiar with the tale you can pick up my EBook here: The Meaning’s Not Just the Menorah. I will say the story is timely and important!

Our Modern-Day Feast of Lights

During this time each year, I drive half an hour to look at the holiday lights in a neighborhood where they do an exquisite job. It’s always amazing and ethereal. But I haven’t gone yet this year because last year there was also something a little… empty about it.

Oh, there were probably millions of mini-lights. And snowmen and reindeer and animated toys and trains.

But where was Jesus??

I think in past years there’ve been at least one or two families who put out nativity scenes. And a vacant lot on a hillside where someone would display a big star of Bethlehem.

Maybe the nativity-scene families moved out. And maybe they filled that vacant lot, because last year I don’t recall seeing a single thing that actually related to the birth of Christ, the “Reason for the Season.” What would He think if He showed up there?

“But wait? Isn’t this supposed to be about Me?”

The True Light Comes to His Own on Hannukah

It made me flash to a mental image of John 10:22—Jesus walking the Temple’s wintry porticoes in the midst of those brilliant Hanukkah festivities.

A little stage-setting. Just a couple months earlier, Yeshua had showed the Jewish people how their “great feast,” The Feast of Tabernacles, pointed to Him. Their Emmanuel / “God with Us” (Matt 1:23). Their Source of Living Water (John 7:38) and Light of the World (John 8:12, John 9:5).

It turns out all the Feasts of the Lord point to Him–and Hanukkah does, too.

Hanukkah is not one of the Lord’s Feasts given to Moses. The Jewish leaders created it to commemorate the miraculous restoration of the Temple in 164 B.C., after Antiochus Epiphanes defiled it by setting up an altar to Zeus and sacrificing a pig in the sanctuary. Josephus tells us that in first-century Jerusalem it was a magnificent eight-day affair.

Now Judas [Maccabeus] celebrated the festival of the restoration of the sacrifices of the temple for eight days, and omitted no sort of pleasures thereon; but he feasted them upon very rich and splendid sacrifices; and he honored God, and delighted them by hymns and psalms.

Yeshua of Nazareth showed up at the festival in the last few months of His ministry. The Pharisees already had Him in their sights. So the Pharisees demanded, “How long will You keep us in suspense? If You are the Christ, tell us plainly.” (John 10:24)

“I told you, and you do not believe; the works that I do in My Father’s name, these testify of Me. But you do not believe because you are not of My sheep. My sheep hear My voice, and I know them, and they follow Me; and I give eternal life to them, and they will never perish; and no one will snatch them out of My hand. My Father, who has given them to Me, is greater than all; and no one is able to snatch them out of the Father’s hand. I and the Father are one.” (John 10:25-30)

Josephus tells us Hanukkah was known even then as the Feast of Lights. And there was the True Light, striding through the midst of the celebration!

They were celebrating the fact that the Temple had been brought back to ritual purity according to the Law. But the Law embodied “only a shadow of the good things to come and not the very form of things” (Heb 10:1). And here was the very “radiance of His glory and exact representation of His nature” (Heb 1:3), walking through the Temple!

There was the true Light which, coming into the world, enlightens every man. He was in the world, and the world was made through Him, and the world did not know Him. He came to His own, and those who were His own did not receive Him. But as many as received Him, to them He gave the right to become children of God, even to those who believe in His name, who were born, not of blood nor of the will of the flesh nor of the will of man, but of God. (John 1:9-13)

And what did the nation’s religious leaders, who should have been “His own,” do?

Missed it. After this “Hanukkah discourse,” the Pharisees picked up stones to stone Him. (John 10:31) But, praise God, thousands of Jewish individuals still “received Him”—welcomed Him eagerly—and gained “the right to become children of God.”

When He Looks at Us, Does He See True Faith?

In November 2014, on the shore of the Sea of Galilee, I had what turned out to be a watershed experience in my journey of faith. We were on a family tour of Israel and I got up early to spend some time in prayer. For no reason that has ever been apparent to me, a verse sprang into my mind.

The question has haunted me ever since.

So what if Yeshua showed up at your average “Christmas Market” today? Would He change His opinion about  “finding faith on the earth”?

If you walk into a Christian home or church it’s different—at least, I sincerely hope it is! But if you look at our public spaces, what’s the holiday about? Toys… Trains… Fairy tales about Santa Claus and the North Pole…

I apologize in advance to anyone I’m about to offend, but when we ascribe god-like qualities to something other than God, that something is an idol.

Consider Santa Claus for a minute…. Omniscient. Eternal. Miraculous powers to reward the “good.” And at least for one night a year, omnipresent.

Of course adults don’t think in terms of worshiping Santa, but we certainly give him a lot of air time! We salute him with stories. Songs. Displays at the mall. Hollywood blockbusters. And while anyone older than six should know it’s “all in fun,” what are we teaching young children? “He sees you when you’re sleeping; He knows when you’re awake. He knows if you’ve been bad or good, so be good for goodness sake!” Right?

As a culture, don’t we spend more effort teaching our children to fear Santa than to fear the Living God? And then in practice, every child is good and gets rewarded. I’ve recently started to wonder whether we might be unwittingly communicating something about the basis of salvation. Everyone’s actions are acceptable? Nothing to be afraid of. Anything goes.

Salvation. Have it your way–not the narrow way.

Again, it’s just something I’m pondering, but are we turning God into our jolly old Santa in the sky, who threatens righteous judgment but in the end will reward everyone no matter how they live? A lot of people, even some who consider themselves Christians, act like that’s how they see Him. And trust me, there was a time when I would have been numbered in that group. 🙁 Thank God for His overwhelming grace, which Jesus purchased for us at such a price! May we never esteem it lightly!

I have another mental image. In this one, the Prince of Peace stands on a hillside, looking down on one of our neighborhoods with its beautiful holiday lighting. And He weeps at the way we’re missing it! Something like He wept the next (and final) time He visited Jerusalem:

When He approached Jerusalem [“City of Peace”], He saw the city and wept over it, saying, “If you had known in this day, even you, the things which make for peace! But now they have been hidden from your eyes. For the days will come upon you when your enemies will throw up a barricade against you, and surround you and hem you in on every side, and they will level you to the ground and your children within you, and they will not leave in you one stone upon another, because you did not recognize the time of your visitation.” (Luke 19:41-44)

The Mount of Olives, the hillside where
Jesus wept over Jerusalem

This prophecy was fulfilled less than forty years later. The city was brutally sacked and the Temple destroyed. According to Josephus, more than a million Jewish men, women and children died in that siege.

“Jerusalem, Jerusalem, who kills the prophets and stones those who are sent to her! How often I wanted to gather your children together, the way a hen gathers her chicks under her wings, and you were unwilling. Behold, your house is being left to you desolate! For I say to you, from now on you will not see Me until you say, ‘Blessed is He who comes in the name of the Lord!’” (Matt 23:37-39)

When Yeshua came the first time, those who should have lined up to welcome Him picked up stones instead.

They were so busy with their Hanukkah lights they missed the True Light.

He will come again, “in just the same way” His disciples watched Him ascend (Acts 1:11).
Brothers and sisters, please stand ready to receive Him when He does!