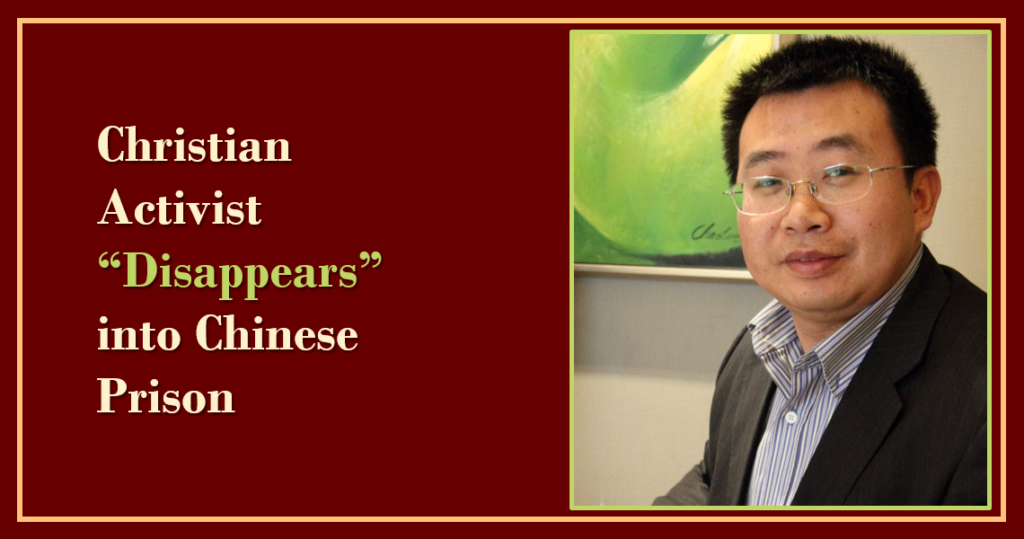 Beatings and verbal abuse aren’t the worst to endure. Forced indoctrination is. I nearly suffered a mental collapse! What you believe to be white, they will eventually make you yourself proclaim it to be black….

As a Christian, however, I felt all along that God was by my side.

– Jiang Tianyong in 2016 interview after a previous arrest

This post on Jiang Tianyong and other Chinese activist lawyers is the fifth in a series on Five Stones and a Sling: Stories of Reckless Faith.

Jiang interviewed in 2012 advocating for blind activist Chen Guancheng. He was beaten by police in return for his pains. Ng Han Guan/AP

Jiang “disappeared” last November, after traveling to Hunan to visit the wife of a fellow attorney who’d been detained. Jiang texted his wife that he was boarding a train back to Beijing. She hasn’t heard from him since.

A few weeks after Jiang’s disappearance, a state-controlled newspaper reported Jiang had been detained and accused of “inciting subversion of state power.” His real crime? Advocating for human rights for minority religions, for vulnerable villagers and for others bold enough to stand up to the Chinese police state.

Jiang’s wife recently received a disturbing report that he’s been tortured to a point where he cannot stand and may be crippled for life.

Jiang has been denied legal representation—in fact Chinese officials will not divulge where he’s being held. His family got no formal notification of his arrest as required by Chinese law. It’s likely he’s in detention in one of China’s notorious “black jails,” in which “forced confessions are common, and in the case of Christian lawyers, often extracted under extreme intimidation and torture,” according to Paul Robinson of Release International. Jiang’s purported confession–certainly forced–has been posted by authorities. See the video here.

This isn’t the first time Jiang has faced trouble with the authorities. In 2009, he was disbarred as a result of his human rights activism. In 2011, police held him for two months. In 2012, police seized him on his way to visit a fellow activist in a Beijing hospital, detained him for nine hours, and beat him so badly he suffered hearing loss. In 2014 police broke eight of his ribs as a result of an effort to investigate a “black jail” where he understood Falun Gong practitioners, a persecuted religious minority, were being held.

Sadly, Jiang is in good company. According to Release International,

Since July 2015, China has rounded up and detained more than 230 human rights lawyers and activists. State-controlled media has mounted a high-profile campaign against them, branding them as both corrupt and criminal…. Many of the lawyers who were rounded up were standing up for justice because of their Christian convictions.

In 2014, Chinese officials worked overtime to squelch dissent prior to the 25th anniversary of the Tienanmen Square massacre. Tang Jingling, a Christian lawyer and home church member, was detained on suspicion of “picking quarrels and provoking troubles.” They held Tang until January 2016, when he was convicted of “inciting subversion of state power”–the same charge as Jiang–and sentenced to five years in prison. He is still behind bars today.

On February 6, U.S. Senator Marco Rubio, the chairman of the Congressional-Executive Commission on China, highlighted the plight of these two men on the Senate floor. Rubio quoted Tang Jingling:

Inside the grand edifice of the court, we can see stately and ornate furnishings and decorations and we can see the government employees in dignified attire. But we cannot see the law and we can definitely not see justice….

The Holy Bible has a passage that reads: ‘Blessed are those who are persecuted for righteousness’ sake.’… We have been pronounced guilty, thrown in prison, separated from our families, and have endured humiliation and difficulties…. But God’s will is inevitably difficult to understand. I often pray and ask him to give me more strength, so that I may persevere…. In 2011, while in a secret jail, and now in detention, almost every day I have passed has been calm and fulfilling. I have never lost my direction.

The ferocity of the Chinese government’s tactics against dissidents was illustrated in mid-January, when Beijing lawyer Li Chunfu, who was detained in July 2015 during the ‘709 crackdown’, was freed on bail.

As the Washington Post reports, “For 500 days Li Chunfu, once a lively and tough human rights lawyer, was kept in secret detention by China’s Communist Party. When he was finally released on Jan. 12, his wife was so shocked she could hardly believe her eyes. Her 44-year-old husband was a thin, pale and sick man, Bi Liping said, a fearful and paranoid person who seemed to have been broken by the system. A Beijing hospital soon gave him a tentative diagnosis of schizophrenia…. Maya Wang at Human Rights Watch said it was unclear what Li was supposed to have done wrong—perhaps demonstrating outside a police bureau in Heilongjiang in 2014 to demand access to his client, perhaps being the brother of Li Heping, a well-known civil rights lawyer who was also detained in July 2015. But what broke him is no mystery, she said in a statement, citing how suspects are frequently beaten, hung by their wrists and deprived of sleep, as well as subjected to indefinite isolation and threats to their families.”

Li also indicated he was forced to accept “treatment” with mystery drugs while in custody.

Recent statements by Zhou Qiang, chief justice of China’s Supreme Court, have led China-watchers to fear the regime is preparing to open a fresh chapter of repression. Qiang directed provincial judges to resist “erroneous” Western ideals of democracy, judicial independence and the separation of powers.

One needs to have a clear-cut stand and dare to show the sword against them, to struggle against any erroneous words and actions that deny the leadership of the Communist Party.

Eva Pils, an expert in transnational law at King’s College London, said Zhou’s speech came as a “real shock” to people in the legal system who had been educated to believe that China was striving for better rule of law and who found it unacceptable that their country was “departing so completely and so rapidly from the reform path.”

It is, in other words, one more nail in the coffin of the idea that China’s legal and political system would ultimately move in a more liberal direction, experts said.

“I think that lots of people are still in denial about this departure from the reform path, and the turn to rule by fear,” Pils said.

Marco Rubio summed it up in his speech on the Senate floor:

The courage and conviction of these men should be an inspiration to us all—an inspiration which should propel us to act…. How blessed and fortunate we are to live by the grace of God in a nation where we have the freedom to speak, to object, to state our views without fear of the circumstances and the consequences these brave men now face.  The Chinese people yearn for the protection of their most basic human rights, and bravely stand with their fellow marginalized and oppressed countrymen. They are China’s greatest asset, not its biggest threat, as the government and Communist Party wrongly believes.

Jiang Tianyong with the son of Wang Quanzhang, a fellow activist attorney arrested in the notorious “709 crackdown”

And please don’t forget to:

Additional Posts from This Stories of Reckless Faith Series

1944: Recruited from an internment camp for Japanese Americans, army linguist Rich Takahashi grapples with a key question. Why should he put his life at risk for an America that robbed him of his future, and his family and his sweetheart of their freedom? What makes an American, an American?

“Goosebumps… Anyone looking for a quick read with full characters and a punch will love this story!!” – Pam, Nevada ... See MoreSee Less