It’s such a privilege to welcome back teacher extraordinaire, author and speaker Lauren Crews, a regular guest here at Five Stones and a Sling. Read this and you’ll never look at a rainbow the same way again! 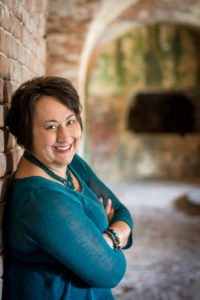 God said, “This is the sign of the covenant which I am making between Me and you and every living creature that is with you, for all successive generations; I set My bow in the cloud, and it shall be for a sign of a covenant between Me and the earth.” (Gen 9:12-13)

My post last month left Noah surrounded by the carnage and destruction of a worldwide flood which lasted a year and ten days. It rained for forty days, but then the fountains of the deep and the floodgates of the sky burst forth with an unrelenting deluge of water covering the earth. The waters subsided after the spirit of God passed over them.

Noah’s protective ark settled, the waters receded, and Noah’s response was a burnt offering: one of every clean animal and clean bird that had initially come onto the ark by sevens. (Gen 7:2-3)

Seven and forty are critical biblical numbers. Seven represents spiritual perfection. In Hebrew, seven is shevah (שֶׁ֣בַע), and it means to be full or satisfied, to have enough. Knowing this certainly changes our understanding of the seventh day being a day of rest, or Jesus’ command to forgive seventy times seven.

Forty (arbaim,  אַרְבָּעִ֣ים) associates with periods of trial which result in renewal and point to the action of grace. Moses spent forty years as a shepherd in Midian being refined by God before he led Israel for forty years through the desert. Jesus spent forty days in the desert preparing for his public ministry which ultimately completed His grace.

God smelled the soothing aroma of Noah’s sacrifice. Mankind’s time of trial was complete, and the renewal of the earth would point to His grace. And so He established a new covenant with man.

“This is the sign of the covenant which I am making between Me and you and every living creature that is with you, for all successive generations; I set My bow in the cloud, and it shall be for a sign of a covenant between Me and the earth.” (Gen 9:12-1)

I’m curious, what do you think of when you see the rainbow? Are you struck with awe? Do you smile at the beauty of it? Perhaps you cringe a little at the sight of the LGBT’s rainbow flag. The symbolism of the rainbow is remarkable, but it isn’t there for our enjoyment. God’s bow hangs as a reminder that He is no longer at war with mankind. Have you ever considered the rainbow in this way?

The Rainbow: God’s Bow at Rest

Would it surprise you to know Genesis 9 doesn’t mention the word rainbow? In fact, the Hebrew Scriptures don’t contain the word rainbow. The word used is just bow. In Hebrew it is qesheth (קֶ֣שֶׁת), a hunter’s bow. The Hebrew root is koshe (כוש), which means to bend, and is spelled kof, vav, shin.

The biblical ancients used bows for both hunting and warfare. Qesheth is the same word used in Isaiah 21:15 which describes a battle scene. “For they have fled from the swords, From the drawn sword, and from the bent bow, and from the press of battle.” In Psalm 46:9 God declares a victory in the fray and “makes wars to cease to the end of the earth; He breaks the bow and cuts the spear in two; He burns the chariots with fire.”

But God’s bow is also a weapon of His wrath.

Zechariah 9:14 declares, “the Lord will appear over them, and His arrow will go forth like lightning.” Lamentations 3:11-13 says, “He has turned aside my ways and torn me to pieces; He has made me desolate. He bent His bow and set me as a target for the arrow. He made the arrows of His quiver to enter into my inward parts.” And Psalms 7:12-13 warns, “If a man does not repent, God will wield his sword; He has bent and readied His bow; that has prepared for him his deadly weapons, making his arrows fiery shafts.”

We do not want to be on the business end of a bent bow, with strings pulled taught, arrows set, aimed and at the ready. Thankfully, God’s covenant through Jesus has provided an escape so mankind no longer needs to be a target of His wrath.

The bow which hangs in the sky is at rest. The arch of the bend is pointing away from the earth. Each time the colors glow in the sky, they serve as a sign of God’s promise that His wrath can be fulfilled completely and satisfied for those who receive His Son, Jesus Christ. Imagine God seeing this sign, a signal, as bow after bow hangs in the sky year after year, waiting for His perfect time to send His Son–Who would hang on a cross.

Rainbow over the Judean desert
Photo by Yossi Zamir/FLASH90

You see, the last letter of the Hebrew alphabet is the tav. Its ancient word picture is a cross:

…which is understood to be a sign—a final signal to mankind of God’s grace. 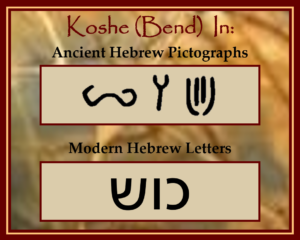 The peaceful bow, which so often follows the gales of a fierce storm, is God telling us He will never need to destroy the earth again with a flood because He sent His koshe. His final sacrifice that connects us to heaven, so we can experience His passionate love.

The rainbow is really the symbol of Jesus.

1944: Recruited from an internment camp for Japanese Americans, army linguist Rich Takahashi grapples with a key question. Why should he put his life at risk for an America that robbed him of his future, and his family and his sweetheart of their freedom? What makes an American, an American?

“Goosebumps… Anyone looking for a quick read with full characters and a punch will love this story!!” – Pam, Nevada ... See MoreSee Less