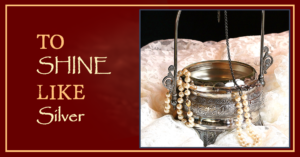 This week I’m super tied up getting ready for a trip to Wales, where our first grandson is about to arrive. I’m beside myself with excitement! My talented publishing “sibling,” Patricia Lee, has graciously agreed to take the mic here at Five Stones and a Sling this week. You’re going to love the brilliant illustration she presents here! 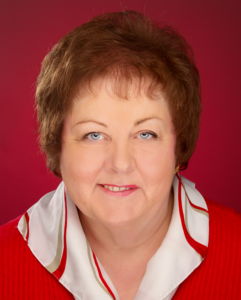 While cleaning a gloomy kitchen space not long ago, I discovered a tray of silverware shoved into an unhandy cupboard. Nestled among a few stale pretzels that escaped their bag was an assortment of silver-plated forks, spoons, and knives I’d long forgotten.

I recognized the pattern as tableware from my mother’s estate. Though I didn’t recall how I’d come by them, their tarnished condition said they’d been neglected awhile. I wondered what I should do with the set. I didn’t want it. But in its present state, no one else would, either. The entire collection appeared to be worthless.

I dug out my silver cleaner to see what polish might do. As black as these pieces were, I doubted I’d make a difference. I lavished the cleaner on a spoon and rubbed. To my surprise, a silver handle emerged from beneath the layer of grime. I worked for several minutes on the pattern, letting each little flower have a good dose of goop. Soon the design gleamed back at me.

I polished one or two each day for a week, allowing my fingers time to rest between rubbings, and  the silver-plate transformed. Soon I had a service for six, plus a few serving pieces. What I had deemed worthless, now gleamed like a valuable treasure. 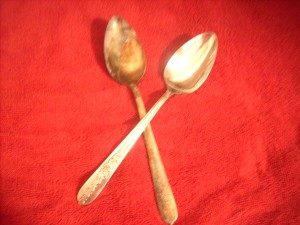 Venturing into that darkened cupboard may have been much like what God did when He sent his son Jesus to redeem a world  of corrupt people. All of us have sinned and come short of the glory of God. (Romans 3:23) On the surface, we appeared worthless. We each needed our layer of sin lifted from our blackened hearts. As I reached for the silverware, so He reached for me.

Just like the silver cleaner, the blood Jesus shed on the cross covered that sin, washing away the tarnish on our souls. The good news is we only have to believe and accept the gift of his sacrifice on our lives. Eternal life awaits us. Acts 16:31 says: “Believe on the Lord Jesus Christ and you will be saved.”

Like the spoon, our lives can shine for Him. Accept the gift Jesus offers you and let him polish you. “Therefore if any man be in Christ, he is a new creature: old things have passed away; behold, all things are become new.” (II Corinthians 5:17)  Think how you will shine when Jesus washes you clean.

Patricia Lee has had a fascination with words and what they can do since she wrote her first short paragraph at the age of six. She doesn’t remember the content of her story, but her teacher became excited at what she’d done. “Obviously,” Pat says, “words made people happy.” In acknowledgement of her teacher’s influence on her life, Pat has dedicated her newest release, A Kite on the Wind, to the woman.

Pat worked as a stringer for a local newspaper during her middle and high school years representing the school’s news to the community. She received her B.A. in Journalism from the University of Oregon, then went on to work as a tabloid newspaper editor at her local church.

After she married, she began her freelancing career and sold to various publications, including Expecting, Moody Monthly, and Power for Living. More recently she has published in two anthologies, Cup of Comfort Bible Promises and Heavenly Company, as well as featured articles in Focus on the Family’s Clubhouse magazine. An Anchor On Her Heart, her debut novel, released in July, 2017. Love Calls Her Home, the second in the Mended Hearts series, released March 1, 2018. The third novel, A Kite on the Wind releases October 1.

She lives were her husband and a handful of furry friends in the Pacific Northwest. They have two grown children.

A Kite on the Wind 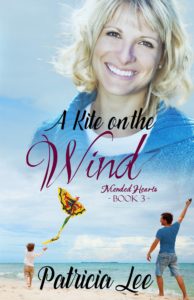 Left waiting at the altar, Claire Simpson has buried her past and moved on, carving out a life for herself as a teacher on the Oregon coast. When her former fiancé appears, he threatens to unravel the peaceful independence she has worked so hard to achieve after their relationship failed. Though she claims she’s forgiven him, she discovers forgetting is not so easily achieved.

Montgomery Chandler has moved to NOAA headquarters in Newport, Oregon to make new, happier memories for his children after his wife died of a lingering illness. Their home in Seattle held nothing but the whispers of their earlier lives. Starting over will help all of them heal, but Monty is determined not to risk love again.

When the handsome widower enrolls his hurting children at the school where Claire teaches, her resolve to remain detached vanishes at the whim of a snowstorm. This family needs her expertise. Can she help them without losing her heart?

Is Love strong enough to overcome the walls they hide behind?