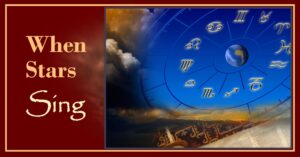 “Night to night reveals knowledge.” (Psalm 19:2)
Something wonderful is unfolding in the night sky right now. Seriously, you need to read this.

This Divine Appointments: Insights from God’s Calendar series started in answer to a question.

“In the beginning,” God created the sun, the moon and the heavenly bodies “to separate the day from the night, and… for signs and for seasons and for days and for years.” (Gen 1:14)

I put forth one very important answer in my first post in this series. The Lord has set divine appointments with His people—the seven Feasts of the Lord. Each of them carries a crucial message—a key preview of prophetic events. The moon tells us when to keep them.

But there’s much more to say about signs in the heavens. Today, I have a fresh angle. And honestly, I think it will astonish you. It has astonished everyone I’ve shared it with.

A great sign appeared in heaven: a woman clothed with the sun, and the moon under her feet, and on her head a crown of twelve stars; and she was with child; and she cried out, being in labor and in pain to give birth. (Rev 12:1-2)

This coming September, this very thing is happening in the skies… for the first time in at least 6200 years!

Sorry, but I just have to say it. This post is full of really cool things I’m willing to bet most have never heard. I hadn’t.

NOTE: I’m adding this on September 4. At this point, you may have heard already about the Revelation 12 Sign. If not, or if you’d like more detail, read on. On the other hand, you may already know all about it but have questions as to whether it’s valid. If that’s the case, you might check out the follow-on post I just published, When Stars Sing (Reprise). It addresses some of the common questions about the Sign’s validity.

I’ve got a list of references a bit further down this post, but we’re told by Yeshua, Joel, Peter and John to look for signs in the heavens that will herald “the great and awesome day of the Lord.” Yes, there were the Blood Moons, and I’ll come back to that. But brace yourself for something even more astonishing!

Here is Virgo with the surrounding stars as they will line up this coming September 23:

Look at the correspondence between the sky map in the picture above and the “great sign” mentioned in Revelation 12:1-2:

Kudos to Scott Clarke, whom I believe gets credit for discovering this incredible upcoming sign. For an in-depth look at the Revelation 12 sign and its implications, check out his YouTube channel.

But Is It Biblical to Look for Messages in the Constellations?

I’ve always heard that Christians should avoid astrology—and we should, as practiced by occultists and as featured in magazines and newspapers. But in fact from Genesis through Revelation, we’re told God Himself speaks through the stars.

I always assumed the Greeks identified and named the constellations. But according to the Bible, God named the stars!

God does nothing without a purpose. Today the idea of looking to the stars, if you are not dealing with the science of astronomy, is called astrology. The word itself means “the word about the stars.” But in our culture it is no longer that at all. It has become a reflection of our attempt to be as God, actually, and we think the astronomical signs are about us. This is entirely perverted. But you can’t have a perversion unless something was right and straight and true to begin with.
– Barry Setterfield, Genesis Science Research

In ancient Hebrew thought, the concept of “name” was much more than a set of syllables you call someone. A name reflects a person’s essential character. It’s fascinating to me to learn that, while what people have called the stars and constellations through the millenia has changed, the essence of what they are considered to depict is surprisingly consistent. The names of the constellations are different but in almost all cases the basic identity is the same!

Hmm… Very much as if this reflects some ancient knowledge imperfectly preserved for us. Could it be that this ancient identification of the pictures in the stars, so nearly universal across cultures, carries some essence of meaning God originally wrote in the skies? 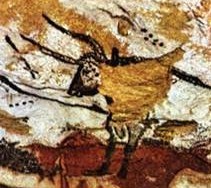 The Bull as depicted in cave art at Lascaux, France, dating to 3000 B.C. This is a clear reference to the constellation! The series of dots above his back are the Pleiades. The dots under his eye are the Hyades, and the four dots to the left of his nose are Orion’s belt.

The division of the year into twelve segments, each identified with one of the signs in the swath of constellations we know as the Zodiac, was documented as early as 2500 BC in ancient Sumer. This knowledge spread throughout the ancient world—Mesopotamia, China, Babylon, Arabia.

The ancient Hebrews knew about this swath of constellations as well. They called it the Mazzaroth. Note how closely the Hebrew version compares to the Greco-Roman Zodiac we’re more familiar with: 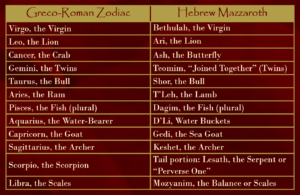 Here’s just a little thing to think about. How did the ancients know that Jupiter should be the “King Planet”? It’s obvious to us—when you look at a map of the solar system, Jupiter dwarfs the other planets. But you can’t tell that by looking at the night sky! Venus appears bigger and brighter because it’s so much closer. How did the ancients know not to call Venus the “king”?

There’s a lot more to be said about the Mazzaroth. In fact the Gospel is written in the stars! Unfortunately it’s beyond the scope of this post. There’s a fascinating summary here if you want to learn more. And a more detailed rundown here.

So…. Back to This Star Thing in September…

If the facts we’ve covered so far aren’t intriguing enough, please note when the Revelation Twelve Sign ends. The “King Planet” exits the Virgin on September 23, 2017. This is the Shabbat that immediately follows the Jewish Feast of Trumpets, Rosh Hashana.

And check this out! How the Sign ends…. Please indulge me for a minute here. I just “happened” across this ancient frieze of a Roman woman with her widwife. Laying Virgo’s star map on top of it:

Ancient frieze of Roman woman on childbirth couch, with Virgo’s star map and Jupiter as they will appear on September 23. Source for the frieze: See page for author, CC BY 4.0, via Wikimedia Commons.

I’m sorry, but tell me Virgo wasn’t created to communicate exactly this!

Just in case you’re not blown away yet…. Why is that September 23 date significant?

The Feasts of the Lord

On Sinai, God ordained a total of seven Feasts of the Lord—the number that in the Bible represents completion or perfection—with God’s lunar calendar determining the dates. The first four feasts, the Spring Feasts, are types of Jesus’ first coming. The Spring Feasts were all fulfilled, in sequence, in precise detail perfectly on their appointed dates on the Hebrew calendar.

The last three feasts, the Fall Feasts, have yet to be fulfilled.

The seven Feasts to the Lord–representation from The Prophetic Scroll. Menorah image by Luis Gonzalez on Unsplash

Next up: The Feast of Trumpets. One hundred trumpet blasts sounded in the Temple on the Feast of Trumpets. “The last trumpet” shall sound before we’re caught up in the air. (1 Cor 15:50) Many believe Paul’s language in this key passage regarding the Rapture may also be a reference to this Feast. In Jewish idiom, the Feast of Trumpets is also known as the feast of which “no one knows the day or hour.” (There’s a good reason for that but I’ll have to go into it another time.)

So what do I think this Revelation Twelve Sign means? I’m not going to use it to “date-set”–although some people certainly do. But given that we’re specifically told about this “great sign” in the heavens, I’m convinced it has to portend something. And it joins a host of other signs that tell us we are indeed in the last days. Most notably, the rebirth of Israel.

Well, speaking of signs in the heavens… I anticipate that some might have this reaction:

But the Blood Moons Came and Went. Nothing Extraordinary Happened.

Did they really? Perhaps nothing of Biblical proportions appeared to happen on the exact dates of the Blood Moons. But remember that God’s perspective on time is rather different than ours! (2 Pet 3:8)

It seems to me we’re a bit like the frog that’s boiled by degrees. We may be too close to see it as it unfolds, but I believe events will ultimately demonstrate that the Blood Moon tetrad of 2014/15 constituted a watershed point in human history.

What did Jesus tell us? “There will be signs in sun and moon and stars, and on the earth dismay among nations, in perplexity at the roaring of the sea and the waves… But when these things begin to take place, straighten up and lift up your heads, because your redemption is drawing near.” (Luke 21:25, 28) Why should we lift up our heads? Perhaps to take note of these heavenly signs!

I used to wish that I could have been alive when Jesus walked the earth. How amazing would that have been? But I’ve come to realize that the days in which we live are just as prophetically significant. And what a privilege it is to be placed here now, “for such a time as this”! (Est 4:14)

Brothers and sisters, the signals continue to mount that we are in the last days. And you’ve been placed here at this time for a purpose–each of us has a job to do. Are you about your Father’s business?

If you’ve never opened God’s free gift of salvation through Jesus (Rom 3:23, 6:23), please please please be persuaded to do it now! It’s simple. Just tell God from your heart that you admit you’re a sinner that needs a Savior (“For all have sinned and fall short of the glory of God.” Rom 3:23), that you’re done running your own life, and that you’re ready to make Jesus Lord of your life.

Horoscope image in banner by Quique from Pixabay
Torah scroll image by Lawrie Cate, CC BY 2.0, via Wikimedia Commons