Home \ Blog \ When the Sun and Moon Sing Praise

When the Sun and Moon Sing Praise 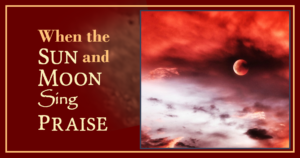 The God whose handprint marks the heavens, Who appointed the sun and moon’s ordered dance,
Has mapped out human history as well.

Who isn’t swept away by the majesty of the heavens? From earliest times, we’ve stared up in wonder.

This weekend, the night sky will furnish one of its most remarkable displays: a total lunar eclipse or “blood moon.” To make the sight even more memorable, this one will also be a “supermoon”—a moon that appears larger than usual because its elliptical orbit has carried it closer to us.

For those fortunate enough to see it, I’m praying it will move us all to meditate on the amazing piece of evidence an eclipse provides that our solar system was designed.

The heavens are telling of the glory of God;
And their expanse is declaring the work of His hands.
Day to day pours forth speech,
And night to night reveals knowledge. (Psalm 19:1-2)

And what was this incredibly elaborate celestial mechanism designed for? God tells us!

Then God said, “Let there be lights in the expanse of the heavens to separate the day from the night, and let them be for signs and for seasons and for days and years.” (Gen 1:14)

The heavenly bodies were put in place for us! Our wonderful loving Heavenly Father put this entire celestial timepiece in place to:

As last year’s amazing “super blood moon” eclipse faded into the beautiful sunrise that followed, I felt overwhelmed. Our Heavenly Father loves us so much!!

But that Biblical perspective is a little different than the prevailing view in our culture, isn’t it?

“Far out in the uncharted backwaters of the unfashionable end of the western spiral arm of the Galaxy lies a small unregarded yellow sun. Orbiting this at a distance of roughly ninety-two million miles is an utterly insignificant little blue green planet whose ape-descended life forms…”

― Douglas Adams, The Hitchhiker’s Guide to the Galaxy 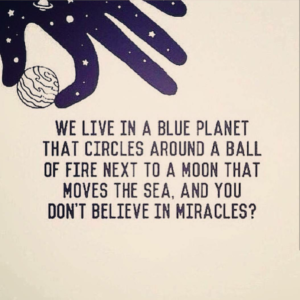 The words translated sign and season in Genesis 1:14 are both interesting. Let’s start with a quick look at sign. Here’s an excerpt from Strong’s definition:

The Heavens as Proof

So the heavenly bodies are on display to showcase the undeniable stamp of our Creator.

…Since the creation of the world His invisible attributes, His eternal power and divine nature, have been clearly seen, being understood through what has been made… (Rom 1:20)

Oh, but scientists have explained all that away, haven’t they? There are purely naturalistic arguments that remove the need to look to a Creator, right?

Yes, scientists have proposed models that attempt to leave the supernatural out of the creation equation. But the more we learn the more those models fall short–and even many people of science are recognizing this truth. What we’ve learned about cellular biology, for example, and the precision behind the construction of the universe really seems to beg the question that there must be an Intelligence behind its design.

Darwin’s proposed mechanism—random mutation and natural selection—has been accepted largely as a matter of faith and deduction or, at best, circumstantial evidence. Only now, thanks to genetics, does science allow us to seek direct evidence…. For the first time in history Darwin’s theory can be rigorously evaluated. The results are shocking. Although it can explain marginal changes in evolutionary history, random mutation and natural selection explain very little of the basic machinery of life.”

As for the Big Bang Theory, it can be reduced, in essence, to “Billions of years ago, nothing exploded and created everything.” How is that provable fact?

The late Dr. Robert Jastrow, an eminent astrophysicist and former Chief Scientist at NASA who’s credited with founding the Goddard Institute, went very public with his struggle with these truths. A self-styled “materialist,” Jastrow wrestles in this video with his growing discomfort over his inability to dismiss the evidence for a Creator.

For the scientist who has lived by his faith in the power of reason, the story ends like a bad dream. He has scaled the mountain of ignorance; he is about to conquer the highest peak; as he pulls himself over the final rock, he is greeted by a band of theologians who have been sitting there for centuries.

The Heavenly Bodies Are for Seasons

Here too, a great depth of meaning gets lost in translation. The word translated seasons ( מוֹעֲדִים, moadim (plural) or moed (singular)) shows up in a lot of interesting places–it’s used 213 times in the Hebrew Scriptures. It can mean an appointed time, an appointed place, an appointed sign or signal, an appointed gathering. It can even mean a betrothal to be married. (This makes a fascinating spiritual linkage–more on that here: When the Bride Makes Ready.) And specifically, it denotes the Tent of Meeting, the physical place where the Lord met with Moses during their sojourn in the wilderness.

It’s probably best known as the word used for the Feasts of the Lord, the seven feasts God gave to the Israelites on Mount Sinai. Those Feasts are “Divine appointments.”

But again, moadim or moed denotes more than a Feast, and more than seasons of the year. It denotes an “appointed time.” Here’s a very partial list of events for which scripture specifically indicates there was or will be an “appointed time” (moade or similar language, e.g. “the time is fulfilled” in the Greek scriptures):

Don’t miss this! The ancient prophets predicted Messiah’s first-century triumphal entry into Jerusalem AND Israel’s twentieth-century restoration as a nation to the day.

He made from one man every nation of mankind to live on all the face of the earth, having determined their appointed times and the boundaries of their habitation… (Acts 17:26)

Make no mistake. The same God who crafted the heavenly bodies and created their ordered dance has also mapped out human history.

He has also “established the boundaries” of each of our lives. You, too, have an appointed time.

And in Your book they all were written,
The days fashioned for me,
When as yet there were none of them. (Psalm 139:16)

The Heavenly Bodies Are for Signs

Let’s explore the word for sign a bit further. Some examples of the word אוֹת (ôṯ) in use:

So miraculous signs were one of the indications that a true prophet of God had arisen within Israel. The word σημεῖον (sēmeíon–sign, mark, token, miracle with a spiritual end purpose) takes over the same sense in the Greek New Testament.

Of course, the New Testament also corroborates the Genesis statement that one of the purposes of the heavenly bodies is to furnish us with signs.

Heavenly signs marked the beginning of the current age. And they will mark its end. 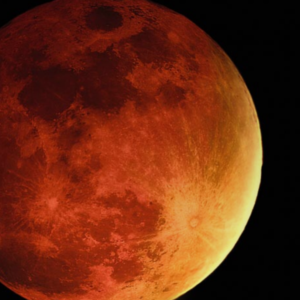 Here’s something I’m not hearing much about, but I find it fascinating. Thanks to Meranda Devan for highlighting it. The bottom half of the diagram below shows the ten lunar eclipses centered around the famous tetrad that took place in 2014/15. Note how the timeline of these ten blood moons displays perfect symmetry, to the day, around the date of 1/5/2015. According to Meranda’s research, no other tetrad since 3000 B.C. has displayed this kind of perfect symmetry.

Further, the solar eclipses in 2011 and 2018/2019 display the same strange symmetry–around the same date.

Heavenly signs that we’re reaching the end of our age are stacking up! So are many, many other signs. See this post for my personal “Top Four list“–signs in the heavens are #4.

And they [the Jewish people] will fall by the edge of the sword, and will be led captive into all the nations; and Jerusalem will be trampled under foot by the Gentiles until the times of the Gentiles are fulfilled. There will be signs in sun and moon and stars, and on the earth dismay among nations, in perplexity at the roaring of the sea and the waves, men fainting from fear and the expectation of the things which are coming upon the world; for the powers of the heavens will be shaken. Then they will see the Son of Man coming in a cloud with power and great glory. But when these things begin to take place, straighten up and lift up your heads, because your redemption is drawing near. (Luke 21:24-28)

The Son of Man is coming, beloved!

Now Is the “Acceptable Time,” the “Day of Salvation”

I just noticed something really cool! The passage Paul quotes here is Isaiah 49:8. Guess what the word for salvation in this passage is in the Hebrew? יְשׁוּעָה yešû‘āh: It’s a form of our Lord’s name! “…salvation, deliverance, help, victory, prosperity. The primary meaning is to rescue from distress or danger….” Isaiah told Israel to look for the “day of Yeshua”!

But here’s a critical truth to take in. In Jesus’ day, Israel was looking for Messiah as the Lion of Judah, who would defeat the Romans and give them their kingdom back. Instead, they got the Lamb, the Suffering Servant—and they rejected the perfect Lamb of God.

Today, people are looking for the Lamb. We’ve worked hard to spread the Good News that God is love—and He is! But many people picture Jesus only as the Suffering Servant, the gentle and meek Lamb who preached “judge not.”

I shudder to imagine their dismay when He returns as the Lion—jealous for His righteousness (1 Cor 11:2)—instead.

“And the Lord, whom you seek, will suddenly come to His temple; and the messenger of the covenant, in whom you delight, behold, He is coming,” says the Lord of hosts. “But who can endure the day of His coming? And who can stand when He appears? For He is like a refiner’s fire…” (Mal 3:1-2)

How astonished will this generation be when our Lord returns as the “refiner’s fire,” the Great High Priest, the Warrior King, and the Righteous Judge?

Brothers and sisters, come to Yeshua for salvation NOW. In this “day of Yeshua.”  He stands at the door and knocks! (Rev 3:20)

Would you rather have the Lamb or the Lion as your Judge?

So glad to see this! Thank you, Mr. President!
"Every person is worth protecting.... Every human life, born and unborn, is made in the holy image of Almighty God!"
www1.cbn.com/cbnnews/us/2020/january/a-watershed-moment-for-the-pro-life-movement-president-trump... ... See MoreSee Less

President Donald Trump will appear in-person to speak Friday at the annual March for Life in Washington, D.C., one of the most illustrious events in the pro-life movement.