My God, Who’s Steering This Boat? 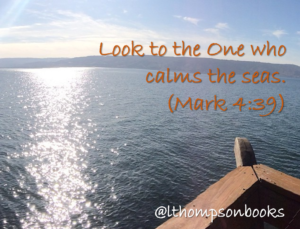 On the Sea of Galilee

Okay. Confession time. I had really really good intentions of doing the November thankfulness thing on Facebook–you know, the one where you post every day about something you’re thankful for. But we all know about good intentions. Somehow the days got away from me and it was too late to start–at least that’s what I told myself.

Really? How could I be “too busy” to come up with one thing a day to be thankful for, in the season of thanks?

So, I’m going to play a little catch-up here in the blogosphere.

These last weeks have been horrific. Whether you lean left or right, you’ve seen something happen in U.S. politics you never expected. The degree of vitriol is beyond anything I’ve known, at least within our borders. But the mayhem of our times is broader than that. The flames in U.S. cities and random shootings on our streets are nothing compared to the heartrending images of war-zone atrocities that flood the news feeds.

Yesterday I retweeted a news brief about wildfires raging near Jerusalem to a list of hashtags, hoping to generate awareness and prayer. I was stunned by the response. I received multiple replies from people with Arabic names clearly mocking Israeli suffering. Rejoicing over civilians injured, over tens of thousands of residents evacuated from their homes.

Tweets I personally received in response to Israeli wildfires. The guy on the bottom is doing some kind of happy dance. :-/

So is that what your Prophet taught you? #MySavior teaches me to love my enemies, pray for those who persecute me. (Matt 5:44)

What is wrong with the world? How did things get so out of hand?

I’m thankful I can rest in the knowledge that none of it surprises God.

But realize this, that in the last days difficult times will come. (2 Tim 3:1)

Nation will rise against nation, and kingdom against kingdom, and in various places there will be famines and earthquakes. But all these things are merely the beginning of birth pangs. Then they will deliver you to tribulation, and will kill you, and you will be hated by all nations because of my name. (Matt 24:8)

I used to wish I could live in interesting times. (I suppose that’s why I write historical fiction.) When I was a girl, that meant the era when women wore billowing silk that swished over hoop skirts. Not sure why that appealed! I didn’t understand the value of modern conveniences like antibiotics, indoor plumbing and the internet, clearly.

Then life knocked me around a bit and I discovered that the power of a pretty dress to satisfy is quite fleeting. The same goes for a house or a car or even a career.

My yearning for a deep joy that would withstand life’s storms brought me face to face with Jesus. I longed to live in the days when He was here in the flesh. To have a chance to see and hear Him. Now those were interesting times.

Prophets and kings wished to see and hear Him, just like I did. But did you know that for every Biblical prophecy of Jesus’ first coming, there are seven that speak of His second coming? And of the worldwide chaos that will precede it? I look around and I see the Middle East in shambles, creating a worldwide refugee crisis with tens of millions displaced. Oh, and did I say earthquakes? Massive quakes rated 7.0 or higher hit New Zealand, Fukushima, Japan, and–while we were gobbling pie and turkey–El Salvador. All within 10 days. That’s not normal.

This isn’t normal either:

Major earthquakes (rated 4.5 or greater) in the PAST MONTH. Screenshot taken from the MyRadar Pro app on 11/24/16.

Of course that bit He said about death and persecution hits home these days too. Christians have become the most persecuted group around the world. Thousands of Christians now face martyrdom each year and thousands more languish in prison even as you read this.

I’m convinced the signs Jesus prophesied in Matthew 24 are evident all around us. The days in which you and I are living are even more prophetically significant than when He taught on the hillsides of Galilee. Like Queen Esther, God has planted each of us right where we are, on purpose, “for such a time as this.” (Esther 4:14) Each of us is “His workmanship, created in Christ Jesus for good works, which God prepared beforehand so that we would walk in them.” (Eph 2:10)

Did you ever wonder which side you would have been on back then? I have, many times. Would I have been with the crowd that clamored for His death, or with those who clustered with hearts crushed, garments torn and faces wet with tears at the foot of the cross? (Maybe both?)

I’m thankful that He’s chosen me for this time and place. That He has an adventure prepared for me.

I can’t go back and choose sides for those days. But I can make my choice for today. I can choose to walk with Him down the path of reckless faith.

The five reasons I will not submit to this one–nor should you. Some even say it’s the Mark of the Beast. I don’t think so, but this lays out why it’s both a dangerous experiment and a disturbing forerunner.

Well, I didn't do a #FreeThemFriday post yesterday because I couldn't figure out how to choose just one!! 😭 But this so-called "equality act" will open the door to Christian persecution in our post-Christian nation on so many levels, it's staggering! Please intercede for Christians in the US, that we will continue to enjoy our #1A freedoms. "First of all, then, I urge that requests, prayers, intercession, and thanksgiving be made in behalf of all people, for kings and all who are in authority, so that we may lead a tranquil and quiet life in all godliness and dignity." (1 Tim 2:1-2)"The Equality Act"

Late last week, Democratic lawmakers in the House of Representatives introduced the Equality Act, a grave threat to religious liberty and conscience rights that would, in effect, erase all legal distinctions between male and female in public life. The Equality Act would make gender identity and sexual orientation protected classes under the Civil Rights Act of 1964, forcing compliance in areas such as public accommodation and education.

Until the GOP lost majority in the Senate, there wasn’t much of a chance of the Equality Act becoming law. The outcome of the Senate runoff races in Georgia made it much more practical for President Biden to keep his promise of signing the Equality Act into law. Of course, its fate in the Democrat-controlled House was never really in doubt.

To be clear, you should only care about the Equality Act if you are a Christian, or a person of faith, or a woman, or own a business, or run a non-profit, or go to school, or teach at a school, or are a medical or mental-health professional, or (especially) are a female athlete, or under the age of 18, or ever use a public restroom. That’s not an exaggeration. In fact, here is the exact wording from the Equality Act:

“An individual shall not be denied access to a shared facility, including a restroom, a locker room and a dressing room, that is in accordance with the individual’s gender identity.”

“any establishment that provides a good, service, or program, including a store, shopping center, online retailer or service provider, salon, bank, gas station, food bank, service or care center, shelter, travel agency or funeral parlor, or establishment that provides health care, accounting or legal services,” along with any organization that receives any federal funding.

As Ryan Anderson of the Ethics and Public Policy Center described in an op ed this week:

“Medical doctors, secular and religious, whose ­expert judgment is that sex-reassignment procedures are misguided would now run afoul of our civil-rights laws. If you perform a mastectomy in the case of breast cancer, you will have to perform one on the teenage girl identifying as a boy. All in the name of equality.”

Shelters for battered women would be forced to admit biological males. Prisons would not be able to protect female inmates from predatory males who claim to be females. Biological males will be given the opportunities, scholarships, and championships of female athletes. It’s not clear that women’s sports would survive. More religious adoption and foster-care agencies would be forced to compromise their convictions about marriage and the family or shut down. School bathrooms and locker rooms would be open to both sexes.

In addition to these effects, the Equality Act would bring with it three broad, sweeping changes. First, specific conscience protections of the Religious Freedom Restoration Act, which have long been legal priorities, would be circumvented in cases deemed discrimination based on gender identity or sexual orientation. Effectively, conscience rights considered religiously-based would be tossed aside.

Second, anyone who affirms the biological reality of the sexes would be, in law, relegated to the same status as the racists whose oppression of African Americans made the 1964 Civil Rights Act necessary.

Finally, The Equality Act would have a dramatic impact on education, public or private. According to a new coalition called “Promise to America’s Children,” a coalition I’m proud to be a part of, the Equality Act greases the skids for even more graphic curricula “about sex, abortion, and politicized ideas about sexual orientation and gender identity ideology . . .” Not only that, but as federal legislation, this would affect every state, not just progressive ones, “overriding efforts by concerned parents and community members at the local level.”

It’s not over, however. The Equality Act still faces significant obstacles in the Senate. Here are three things you can do:

Contact your Representative and your Senators and let them know to oppose the Equality Act.

Share widely the resources and articles on the Equality Act found at BreakPoint.org.

Go to promisetoamericaschildren.org and sign the statement committing to prioritize children’s rights over adult happiness and share the resources found there with your pastor, church, and community.