FREE EBook! When the Ancients Cry From the Dust

Home \ Blog \ …And This Should Give You Goosebumps

…And This Should Give You Goosebumps

To you, LORD, I call, for fire has devoured the pastures in the wilderness and flames have burned up all the trees of the field. (Joel 1:19)
Sound an alarm in my holy mountain: let all the inhabitants of the land tremble: for the day of the Lord cometh, for it is nigh at hand… (Joel 2:1)

Hundreds of Thousands of California Acres Are Now a Tragic Inferno

As of this  morning, the fast-moving Mendocino Complex Fire has become the largest in California history–after only ten days. Hundreds of thousands of acres are on fire. The Mendocino Complex has eclipsed last year’s Thomas Fire, and started to edge the Carr Fire from the headlines. 14,000 firefighters have been deployed across the state, including reinforcements from the military and from far away Australia and New Zealand. (Please pray for them all!)

The vicious Carr Fire near Redding, California, has already torched more than 121,000 acres, an area larger than Denver, since igniting on July 23. Flames have destroyed more than 1,000 homes in and around Redding, a town 200 miles north of San Francisco and home to 90,000 residents. Carr is now the seventh most destructive fire in state history… Carr is so large and so hot, it has created its own weather system and melted boats on Whiskeytown Lake. Residents reported seeing fire tornadoes, and the rising smoke and ash created towering, dark pyrocumulus clouds. As of Thursday morning, the fire is only 35 percent contained, and firefighting costs have already reached $24 million.

It’s an alarming echo of last year’s devastating fire season, which charred more than 10 million acres, making it one of the worst years in more than three decades. California suffered its largest wildfire ever, the Thomas Fire, which engulfed an area 1.6 times the size of New York City. 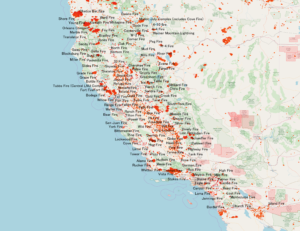 California wildfires of 2017. Each dot represents a distinct fire. Photo: By Phoenix7777 via Wikipedia.

Here’s a tally of the heart-breaking toll from the California wildfires last year, which were the deadliest wildfire disaster in California history:

…and that’s in California alone. ☹ I’ve yet to find a good tally of the toll of 2017 wildfires nationwide—or worldwide. Last year also saw record-setting wildfires decimate areas of Spain and Portugal, Canada and Brazil.

And yes, we were warned! In a specific way…

Not quite two years ago, after wildfires ravaged Tennessee, an employee cleaning up at Dolly Parton’s Dollywood attraction found this–a lone page ripped from a Bible–under a charred bench:

It’s a page from the Book of Joel. The verses that were legible were:

Joel 1:15
The day of the LORD is near, the day when destruction comes from the Almighty. How terrible that day will be!

Joel 1:19
To you, LORD, I call, for fire has devoured the pastures in the wilderness and flames have burned up all the trees of the field.

Joel 1:20
Even the beasts of the field pant for you because the water brooks are dried up, and fire has devoured the pastures of the wilderness.

And at the bottom, barely legible:

Joel 2:1
Blow ye the trumpet [shofar] in Zion, and sound an alarm in my holy mountain: let all the inhabitants of the land tremble: for the day of the Lord cometh, for it is nigh at hand;

The context of this passage is part of what makes this so eerie. If you’re not familiar with the book of Joel, it’s a stern warning of impending judgment, and a last-chance call for repentance. The details of that judgment are a little mysterious. It takes the form of a locust infestation that is not mentioned elsewhere in Scripture. However, like many Hebrew scriptures, the book of Joel will apparently have multiple fulfillments. Jesus cites it in reference to His second coming (Matt 24:29), and both Peter and John allude to prophecies from the book of Joel relating to the end of days (Acts 2:19-21, Rev 6:12). I also think you could argue that God Himself gave this passage a fresh context, by allowing this charred page to:

The find gave the young man “goosebumps.” With 20/20 hindsight, in view of the wildfires that have raged around the world in the two seasons since, plus all the other signs that we’re in the last of last days… me too.

Wildfires have almost become a year-round threat in some parts of the western United States. From Colorado to California, it feels like the blazes from last year never went out. Flames ignited forests and chaparral virtually nonstop in 2017, and the year ended with record infernos in Southern California that burned well into 2018.

Officials don’t refer to “fire seasons anymore but rather to fire years,” Jennifer Jones, a spokesperson for the National Interagency Fire Center, told me in an email.

How many ways is God pleading with our generation?

When the Ancients Cry from the Dust. Eerie find... An ages-old witness... Israel's dust cries out!