Home \ Blog \ Wrestling with God: Who Can You Become?

Wrestling with God: Who Can You Become?

To become all God has planned for us requires a journey of radical (“to the root”) transformation. How far are you willing to go?

It’s here again—that time of year with so many favorite stories. The wise men, the shepherds, the virgin, the Baby.

I’ve been reading for the last few weeks in Genesis, because all the stories start there. And I’m amazed at how even the lives of the ancient patriarchs seem to hold a mirror in front of my face.

This week the powerful story was Jacob’s. The man spent his early years wheeling and dealing. Scratching and clawing his way to success by the dint of his own efforts.

Jacob’s very name meant “heel grabber.” But God had a different destiny for him.

Who do you think you are?

Who are you willing to become?

Jacob’s approach to life reduced him to running for his life. Twice. As a young man, he had to flee his twin brother Esau after he manipulated him out of his birthright and cheated him out of their father’s blessing. Two decades later, he’s on the run again, this time as the outcome of a disastrous string of business deals with his uncle, who turned out to be a bigger trickster than Jacob himself.

With his uncle behind him and his estranged brother ahead, Jacob comes to the end of himself. In a clear turning point, he humbles himself and acknowledges that everything he’s gained is the fruit of the Lord’s blessing on his life—not his own efforts. He entreats the Lord for help. And in an odd passage I won’t tell you I completely understand, God shows up. Literally.

Then he said, “Let me go, for the dawn is breaking.” But he said, “I will not let you go unless you bless me.” So he said to him, “What is your name?” And he said, “Jacob.” He said, “Your name shall no longer be Jacob, but Israel; for you have striven with God and with men and have prevailed.” Then Jacob asked him and said, “Please tell me your name.” But he said, “Why is it that you ask my name?” And he blessed him there.

When God shows up in your life,
is it ever to wrestle? 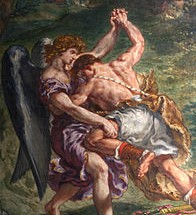 As I’ve prayed through this story, the Lord has shown me a few things.

Sometimes faith means refusing to let go of God
until you get the blessing you need.

I’d like to think I’m not a manipulator, a “grabber of heels” like Jacob. But I certainly have always been “clever” about getting things done through my own efforts. And like Jacob, I feel I’ve hit a wall. The mountains that need to move in my life right now are clearly beyond my strength. I have some family concerns I won’t elaborate on. And five years invested in a novel I’m hoping to see published. But… I just got a “no” from a publisher I’d pinned my hopes on.

Am I ready to give up my current identity that relies so much on my own efforts? To declare my old ways bankrupt?
Am I ready, after all of these decades of trusting in myself, to let go of that and let Him make me over?

If I want to walk into my God-decreed destiny, the answer must be yes.

Israel’s story ends when he dies at peace, surrounded by his twelve sons who will father the tribes of Israel.

This is the season when we celebrate some really big miracles of transformation. I mean, if:

I guess there’s hope for us all!

Stories like this are only possible due to the most amazing transformation of all. The Word whose power spoke the worlds into existence emptied Himself. Became an infant too weak to crawl. The “radiance of His [God’s] glory and the exact representation of His nature” (Heb 1:3) had to be wrapped in a diaper and put down on a bed of dirty straw.

Gorgeous recreation of the gold-plated menorah that once lit the Jewish Temple, on display (behind bulletproof glass) in Jerusalem’s Jewish Quarter. It stands about, oh, eight feet tall!

The feast of Hanukah also celebrates transformation. A family of faithful priests became God’s generals and a forgotten cruse of oil lit a defiled Temple for eight days. Thanks to the miracle of the oil, the Temple could be purified and rededicated to its purpose. (A lot of people are surprised to learn Jesus and the first-century church celebrated this holiday, not Christmas! See John 10:22. Hanukah has wonderful relevance for Christians.)

By God’s power, the longest nights of the year are transformed as we celebrate the light. The light of the Temple Menorah; the Light of the World it prefigured. I think that’s why we resonate so much with this time of year.

The most ominous date on the Hebrew calendar, marking the destruction of BOTH the First and Second Temple, begins tonight at sunset. Four surprising facts *from Jewish sources* that show Jesus is Messiah. History is HIS story.

#FreeThemFriday Outrageous! Where is the outcry??
endtimeheadlines.org/2020/08/hundreds-of-christians-murdered-by-islamic-jihadists-across-3-africa... ... See MoreSee Less

Hundreds of Christians Murdered by Islamic Jihadists Across 3 African Countries

(CBN) - An ongoing campaign of terror against Christians has been waged across northern Africa in recent weeks, leaving several hundred Christians