The Plum Blooms in Winter 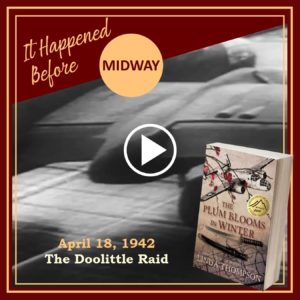 Inspired by a Gripping True Story of Courage and Forgiveness

Dave made aviation history in WWII’s daring Doolittle Raid. Now he’s a downed pilot on the run.
Miyako made a vow to bury a knife in him. That vow could cost them both their lives.

Japan, 1948. In a world where honor means everything, what would you risk to salvage yours? The war has reduced Miyako Matsuura to a street-hardened prostitute, forced to sell herself out—body and soul—to survive. But when the pilot whose bomb stole her little brother’s life returns to Japan, she sees her one chance to salvage everything. That quest drives her like the point of a dagger.

If you like pulse-pounding tales of redemption that brim with deeply drawn characters and taut suspense, you’ll love Linda Thompson’s powerful debut novel. Immerse yourself in this award-winning story of courage and redemption today!

“A poignant story about bitter defeat and the power of forgiveness. With her lovely prose, Linda Thompson sweeps readers away on a journey to Japan and China during and after World War II, crafting a novel about the remarkable beauty and strength that bloomed in the midst of adversity. A brilliant debut!”
– Melanie Dobson, award-winning author of Hidden Among the Stars and Catching the Wind

“A gripping quest. A wrenching conclusion. This book will change you.”
– Maegan Beaumont, author of Independent Publishers’ Gold Medal winner Carved in Darkness and the Sabrina Vaughan series

Join Linda’s “Red Carpet Readers Club” and get a front-row seat for all the book launch action.
Score a chance at monthly drawings and prizes.
Be the first to get news on launch events, access to Advance Reader Copies and pre-launch discounts.

Success! Now check your email to confirm your subscription.

“This is a grand, ambitious story set during World War II… It’s a story of impossible choices that lead to terrible regret. It’s a story of captivity and freedom, of honor and culture, of revenge and forgiveness. The setting is unique, the peek into Japanese culture is fascinating, and the message of grace is timeless. Linda Thompson is destined to become one of the greats in Christian fiction.” -Robin Patchen, award winning author of Convenient Lies and Finding Amanda

“Pearl Harbor is a household name, but what came next? The Plum Blooms in Winter shines light on American heroes of the Doolittle Raid and post-war life in Japan. Even if you’ve been an avid World War Two reader, this unique story is sure to capture your heart and mind, as you follow the journey of two characters on opposite sides of the world (and of the war).” -Caroline Walker Argenti, grandniece of Lt. Robert Meder, Doolittle Raider

“Linda Thompson has become one of my favorite new authors! World War Two can be too huge to contemplate, but peering into the hearts of two people living through that war brings it home with heartbreak and redemption. I look forward to following these people in their next adventure.” -Hannah Alexander, author of Hideaway Home

Disclaimer: As an Amazon Associate I may earn from selected purchases.

The seven-day Feast of Booths (“Tabernacles”), the last of the Lord’s Feasts, has an odd feature—an eighth day. The Lord’s invitation to linger… with Him. This is a “bridge” post between my Divine Appointments series, which explores messages the Jewish calendar holds for today’s followers of Messiah, and a series on the “I Ams of Jesus” […full post]

What I get to spend my day doing... one more proof, this time with an actual printed book! I LOVE the cover even more in real life! Anyone else ready for *all the fall* 🍁🍂? Foliage below our new house is starting to turn (and we've spent the past 20 years in a place pretty much devoid of seasons)! 😍 #TheMulberryLeaf #TheMulberryLeafWhispers ... See MoreSee Less