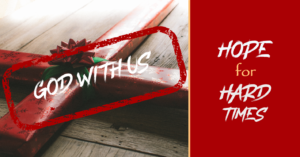 Therefore the Lord Himself will give you a sign: Behold, a virgin will be with child and bear a son, and she will call His name Immanuel (Is 7:14).

I knew that verse well, of course, as one of dozens of Messianic prophecies fulfilled at Jesus’ birth. I’ve even sung it, along with Amy Grant! But I’ve only recently come to a better understanding of its amazing context.

It is ~700 B.C. The idolatrous King Ahaz–worst Judean king ever–reigns in Jerusalem, and the city is surrounded by fierce armies bent on its destruction. Unless salvation arises, the people face starving through a long siege, followed by either slave labor or death. The king’s brother and others close to him have already lost their lives in the campaign to defend Judah (2 Chron 28:7).

The fate that awaited losers in ancient wars. Here, Assyrian soldiers under Sennacherib carry plunder and captives away from the Judean city of Lachish. This ancient relief resides in the British Museum.

God’s prophet Isaiah places the blame squarely on Judah’s leaders, who have enriched themselves, drinking themselves into a hedonistic stupor while neglecting “the deeds of the Lord… the work of His hands. Therefore my people go into exile for their lack of knowledge” of the Lord and His ways (Is 5:12-13).

That day, Isaiah had what you’d call a divine appointment. The Lord sent him with a message for the wicked king. And it’s a message of hope—a child will be born as a sign that this immediate threat would evaporate. The child will be called Immanuel—“God with us” (Is 7:14, Matt 1:23).

God with us was a reversal.

Isaiah 7-8 is the only time this name is used in the Hebrew scriptures—and what a promise it holds out! A restoration of something lost centuries earlier when Israel bowed in worship to the golden calf.

Before the sin of the golden calf, the Lord traveled the wilderness with His people in cloud by day and fire by night (Ex 13:21). But after the calf disaster, the Lord would no longer proceed with them as before. Instead, the pillar of cloud would descend to a special “tent of meeting” Moses built—significantly, “outside the camp, a good distance from the camp.” (Ex 33:7) There Moses would speak with the Lord… while the people looked on from afar.

Israel’s sin had created such a deep rift between them and God that there was only one remedy: ongoing blood sacrifice (Ex 33:3). The Lord couldn’t “go along in their midst” again until Moses and the people had fulfilled His edict to

God with us was a promise for Judah 2700 years ago.

In spite of the dark days the nation was going through as a result of their disobedient, God had not given up on them He had not given Jerusalem over to her enemies. He was faithful to His promise to Ahaz, even as the king doubled down on his rebellion against God (2 Chron 28:22-25).

God with us is an invitation to us now.

Prophecies in the Hebrew scriptures often have a dual fulfillment.

Now all this took place to fulfill what was spoken by the Lord through the prophet: “Behold, the virgin shall be with child…” (Matt 1:22-23)

And the Word became flesh and dwelt among us, and we saw His glory, glory as of the only begotten from the Father, full of grace and truth…. (John 1:14)

This has become one of my favorite verses in the Bible! The word for “dwelt” is the verb form of the word for tent or tabernacle. Jesus’ once-for-all blood sacrifice has allowed our God to “tabernacle” among us once again.

And there’s more. Thanks to Jesus’ work in our lives, now “we are the temple of the living God” (2 Cor 2:16). We have become His sanctuary and He tabernacles among us—in an even more intimate way than when His presence filled a tent in the desert.

Ahaz’ Jerusalem may have been surrounded by enemies, but no abiding harm could come to her while God was with her.

We may feel surrounded by disease, by uncertainty, by political strife. But…

Who will separate us from the love of Christ? Will tribulation, or trouble, or persecution, or famine, or nakedness, or danger, or sword?… In all these things we overwhelmingly conquer through Him who loved us. (Rom 8:35, 37)

God with us May Come in a Form We Don’t Expect. 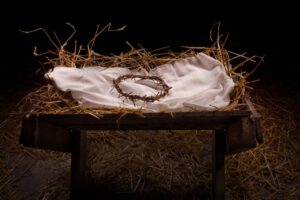 God With Us often shows up in a form we don’t expect.

The Judean people 2700 years ago may well have asked why, if God was with them, He would allow hundreds of thousands of them to be slain or taken captive. But consider this. Did the suffering they experienced under Ahaz fuel the great revival that followed under his son, Hezekiah? Was the tragedy exactly what they needed to draw them back to God?

We may wonder why God allows evil to appear to triumph, our livelihoods to be destroyed, disease to take those we love. Why 2020, to put it succinctly. The presence of “God with us” whispers to our hearts that we can trust His plan, even if there are times when we can see no earthly good in it. 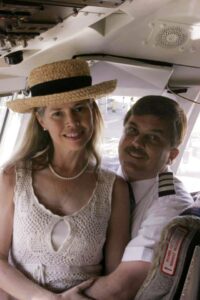 My husband has loved his career as a pilot. Here we’re on our way to a memorable stay in Hawaii some years ago. But now he is experiencing vision issues that may prove career-ending. Not what we expected, but we don’t doubt this is God With Us showing up.

To steal C.S. Lewis’ words, our Lion of Judah is “not a tame lion.”

2020 is only one chapter in a grand cosmic battle that’s been raging since the dawn of time. He has the big picture. I don’t. I don’t even really know what’s best for me, much less what God is up to as He “works all things together for good” (Rom 8:28).

No matter how disastrous things may look from our perspective, we can always rely on His plan to be “exceedingly abundantly above all that we ask or think” (Eph 3:20).

(Expanded from a version published the in the Mountain Brook Ink newsletter, 12/15/2020.) 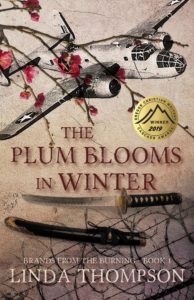 And here’s my gift to you:

My Award-Winning Debut Novel Is Free Through 12/18!

Grab it during its first-ever free days on Amazon Kindle!

Dave made aviation history in WWII’s daring Doolittle Raid. Now he’s a downed pilot on the run.
Miyako made a vow to bury a knife in him. That vow could cost both their lives.

Japan, 1948. In a world where honor means everything, what would you risk to salvage yours? The war has reduced Miyako Matsuura to a street-hardened prostitute, forced to sell herself out–body and soul–to survive. But when the pilot whose bomb stole her little brother’s life returns to Japan, she sees her one chance to salvage everything. That quest drives her like the point of a dagger.

If you like pulse-pounding tales of redemption that brim with deeply drawn characters and taut suspense, you’ll love Linda Thompson’s powerful debut novel. Immerse yourself in this award-winning story of courage and redemption today!