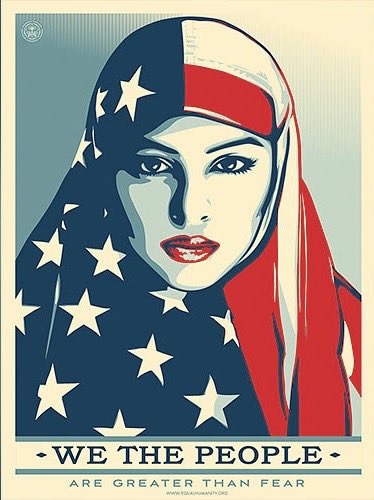 Is this banner featuring Islam’s hijab a bold statement of freedom and progress? Or a grim emblem of rape culture? Read what the Quran actually says about women, then decide.

Let me be perfectly clear: I don’t hate or fear individual Muslims. I feel profound compassion for Muslim refugees around the world. I pray for them and I donate to organizations that aid them. And I don’t believe every follower of Islam is a terrorist.

Further, I don’t have any issue with a Muslim woman who chooses to wear a hijab in observance of her faith. Few things are as dear to me as the freedom of religion we all enjoy in our nation.

But I do have grave concerns with the Quran and with the cruel, repressive system known as Shari’a Law, which the Quran commands Muslims to observe. And worse, to force on others.

I’m writing this to plead with my non-Muslim sisters. I see this banner featured as if it were some kind of bold statement of liberation and progress.

How can we not see this for what it is: a grim emblem of a real “rape culture”?

We have worked so hard for the rights we enjoy. Why in the world would anyone hold up this hijab image that glorifies a system that traps hundreds of millions of women in the Muslim world in a culture of bondage they did not choose and cannot escape?

When you raise this banner, here’s what you’re saluting.

More on the Status of Women in Islam

Here are some additional statements from an article on TheReligionofPeace.com:

“A woman’s heaven is beneath her husband’s feet.”– Traditional Islamic saying

“Women are like cows, horses, and camels, for all are ridden.”
– Respected Islamic commentary (Tafsir al-Qurtubi)

“She should not go out often, she must not be well-informed;… She should be clean and ready to satisfy her husband’s sexual needs at any moment.” – Revered Islamic scholar, al-Ghazali [Ibn Warraq]

“The Christian religion does not differentiate between women and men, but it confirms their perfect equality: it gives them an equal share in inheritance, it bans divorce, and it bans polygamy.”
– An Egyptian cleric, slamming Christianity on a TV talk show.

“Our religion has defined a position for women (in society): motherhood.”
– Turkish President Recep Tayyip Erdogan in 2014

Homa Darabi was a talented physician who took her own life by setting herself on fire in a public protest against the oppression of women in Islamic Iran. She did this after a 16-year-old girl was shot to death for wearing lipstick. In the book, Why We Left Islam, her sister includes a direct quote from one of the country’s leading clerics:

“The specific task of women in this society is to marry and bear children. They will be discouraged from entering legislative, judicial, or whatever careers which may require decision-making, as women lack the intellectual ability and discerning judgment required for these careers.”

Modern day cleric Abu Ishaq al-Huwaini has called for a return of the slave markets, where Muslim men can order concubines. In this man’s ideal world,

“…when I want a sex-slave, I go to the market and pick whichever female I desire and buy her.”

At best, Islam “elevates” the status of a woman to somewhere between that of a camel and a man.

Why would anyone think for a second about giving up the relative equality and security Western women enjoy for a nightmare scenario of degradation and repression?

Honestly, I can’t fathom it. But I can offer a couple of observations.

I do have some thoughts on that! In fact this has turned into a three-part series comparing the Bible’s teaching on women to the Quran’s. If you’re interested, you’ll find the second and third posts here:

A wealth of additional (horrific) information on the realities of life under Islam can be found here.

The hijab: a bold statement of liberation and progress?
Or grim emblem of a real “rape culture”?